Texas Instruments' graphing calculator division has long focused on doing one thing particularly well: creating the graphing calculators that most students and teachers use. There have been some hiccups over the years, and we at Cemetech have certainly appreciated some of the alternatives like the Casio Prizm, but there's no denying that Texas Instruments remains the leader of the pack in real-world math usage. Until 2011, all of TI's graphing calculators offered a grayscale or monochrome LCD and similar vertical cases covered in keys. The 2011 introduction of the TI-Nspire CX, at least in this community, was received with mixed emotions. Some appreciated the large color screen, touchpad interface, and newly-added ability to write Lua programs. Others bemoaned the continued lock-out of native C/ASM programs, and criticized the device's document interface as cumbersome and unintuitive. Yesterday, I (and separately, TI-Planet) sat down with two of TI's marketing managers to discuss a new product being announced today. Joining us was Tom, a teacher from Ohio who has been working with this new offering, to provide the educators' perspective. In what is a dramatic departure from all of their previous offerings, Texas Instruments has unveiled two apps for the Apple iPad, called the "TI-Nspire App for iPad" and the "TI-Nspire CAS App for the iPad".

As the names suggest, these apps offer the majority of the TI-Nspire CX and TI-Nspire CX CAS features in the form of iPad apps, each of which will be offered for a penny under $30. While the TI contacts to whom I spoke acknowledged that there are scattered apps available that attempt to teach math concepts or offer math tools, one of the strengths of these apps is a complete, integrated tool that offers almost every feature of the TI-Nspire calculators with a familiar interface. They explained that the app is built to be intuitive to students and teachers who have already used the TI-Nspire calculators, but showed off some of the new opportunities that the iPad provides. Two of the most obvious additions are a larger color screen and touch abilities. With the large screen, graphs can be very detailed without becoming hard to read. Tom spoke of "the power of visualization" and how important he feels visual learning is to driving home math and science concepts to students. I was particularly impressed that you can use your fingers to drag and re-shape graphed functions; in the video below, you can see a user changing the coefficients of a parabola by dragging it. In this age of smartphones and tablets, indeed, a touch interface is often more obvious to younger users than a mouse-based interface, particularly in a piece of mobile technology.

Needless to say, I had many questions about this addition, which Dale Philbrick, marketing manager for mathematics at TI, was happy to answer. First, he reassured me that while this pair of Apps aims to fill a hole with schools that have adopted iPads in the classroom, it doesn't portend any impending change of strategy with TI's handheld calculators. It is meant to be an expansion of the TI-Nspire family rather than a replacement for any existing devices. TI anticipates that the completeness and polish of these apps, including their ability to run the large library of activities that the company has built up for teachers to use in their curricula, will appeal to schools that are now using iPads in their classes. Mr. Philbrick acknowledged that as long as standardized tests like the SAT forbid internet-connected devices and tablets, this will not be an option, but may be used in classroom evaluations, and that the similarity of the interface between the TI-Nspire Apps for iPad and the TI-Nspire calculators would facilitate students using both. I also learned that TI will be showing off these new Apps during sessions and panels at the upcoming T3 2013 conference, where I will be presenting the pedagogical value of teaching programming with graphing calculators.

Speaking of programming, I learned that these new apps will be able to run both Lua and Nspire TI-BASIC programs. A new API will eventually be added to Lua programs to allow them to take advantage of the larger screen and to understand touch and possibly multitouch. Nspire TI-BASIC programs will be able to be written directly on the device, while Lua programs must be written with the TI-Nspire Student Software on a computer and then transferred to the device.

These apps are now available, and we look forward to hearing people's reactions to them. I will certainly bring updates as I get them, and provide a firsthand look at the apps when I get to use them at T3 (or sooner, if the opportunity presents itself). What do you think of these new chances? Is this an inevitable shift that had to happen sooner or later as powerful mobile devices become ubiquitous? How do you see them affecting math instruction in the classroom; do you think the lure of distractions on an iPad would be too great? Will traditional handhelds like the highly-anticipated TI-84 Plus C Silver Edition remain relevant? Be sure to join in the lively discussion in the attached topic.

Editor's Note: TI has noted that there are "no plans for an Android app at this time," and has also provided this update on the App: "Immediately after the TI-Nspire Apps for iPad were posted on the App Store, we discovered an issue with App Store settings and have temporarily removed these apps from the store. We are working to update these settings and will repost the apps as soon as possible." 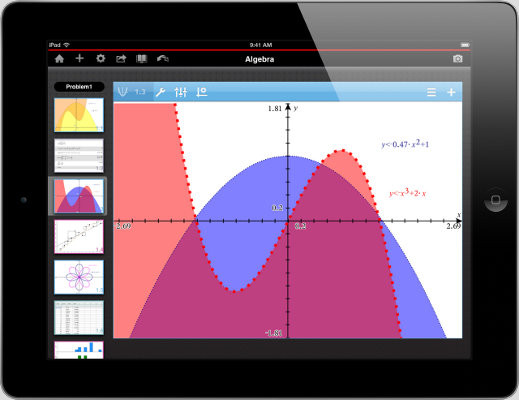