Hello everyone! I am creating a "new" (but really and improved version) game, based off my previous titles "Battle 84" and "Battle CE". In this new version I'm making the game more interesting, with more items and actions, more enjoyable for the players.

In this, the game will become Unknown. Two players (two people share one calculator) are trapped in a forest of the Unknown, and both have to fight to the death to survive. Through the forest, there are plenty of resources and other things to make the game more interesting. Both players start with a set amount of HP and SP (shield points), and both have to use the resources on the map and items to fight each other and make it to the end. However in this version of the game, there is a twist. Once one player defeats the other, the winner has the opportunity to fight the entity that guards the forest, and the player has to defeat the entity (the boss) to make it out of the forest. If the player defeats the boss, they escape the forest and win. If they lose, the forest will continue to be a trap for the wandering adventurers...

Anyways, here are the plans for each player's stats during the game:

So a rough idea on how gameplay will work:

Each turn, a player will have a variety of options to choose from:

- Roll & Move
- Use an item
> Potion: Restores 9HP
> MagicOil: Restores 8SP
> Undying Essence: Restores all HP and SP
- Attack Opponent: Deals damage based on Atk points. If you are standing on top of the other player the Atk points are doubled.
- View Map: Views the map.
- Actions
> Place a mine: Place an invisible mine on the map (mimics grass). If the player steps on it, it deals 15 damage.
> Throw rocks: Throw a large or small rock. Large rocks deal 9 damage, small rocks deal 3 damage.
> Break large rocks: Break a large rock to 3 small rocks.
> Break Tree: Break a tree surrounding you.
- ??? (turns to Fight Boss once user is ready to fight the boss)
- Skip Turn
- Quit Options
> Save & Quit
> Quit
> Return to Game

And them some other plans I have:

Each player will start with some items for themselves:


Throughout the map there will be randomly generated items and other objects:

- Magical As to increase your max attack


after one player kills the other


and they will fight said entity, and if they win against it, they can leave the forest and win

but if they lose, the game will end in a tie


And if you want, you can throw rocks at your opponent to deal damage

both players start with 30HP, 10SH

What do you think so far?
Please do not call me BioHazard.

This is a really cool idea. but what calculator is this for?
↑
Quote

IceWorks wrote:
This is a really cool idea. but what calculator is this for?

I do have older versions of this for the TI-84 Plus as well
Please do not call me BioHazard.

noice. what language r u planning on coding it with?
↑
Quote

IceWorks wrote:
noice. what language r u planning on coding it with?


The same I usually do, TI-Basic with the aid of Celtic CE
Please do not call me BioHazard.

So far the main game is complete. The basic gameplay is done, all I have left to do is the boss fight. 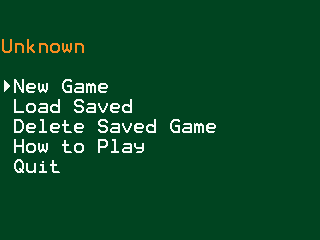 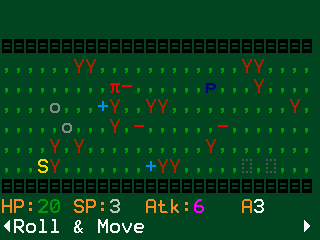 Please do not call me BioHazard.

Good work! I like you're just using colored built in characters. Looking forward to seeing this finished!

So far, I have made more progress with Unknown. A small list of what's completed as of this post:

I have a general idea on how the boss fight will go. The player will attack or use an item, and then the entity will do it's turn. For the player, I was thinking attacks sometimes miss (90% success) and then the boss attacks sometimes miss (75% success). The boss will have 60HP and 10SP, I was thinking of sometimes the boss healing itself when it's health is low, so it makes the fight more interesting and adds more difficulty.

Some screenshots of what I have so far: 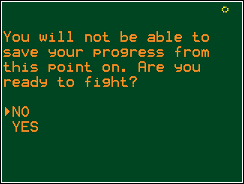 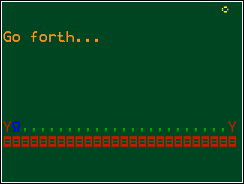 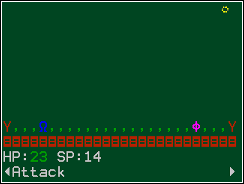 At the beginning of the fight, the player will have to "walk forward" (press or hold the right key), the boss will appear from the sky and then stand on the ground, the player backs away a few spaces and then the fight begins. This has somehow turned into an RPG lol

What are your thoughts so far? And what can I do to make the boss fight stage more appealing instead of it being mostly blank? Maybe add the "soul" of the fallen player, and other souls of those who tried to fight the boss but failed?

I was also thinking of the player taking the items of the fallen player if they are about to lose, or the souls give the player the ultimate power or something like that.

I am also thinking of changing on how attacking works.

For the main game, a player will have it's normal attack points of (5 for starting). I was thinking of a rare chance for the attack to be doubled (maybe 8% chance), but the attack will already be doubled if both players coordinates are the same.

For the boss, I was thinking of the boss attack's to miss 15% of the time, with a 10% chance of the attack being doubled (hope you're prepared!!).

As of this point, a demo of the game has been completed. Feel free to PM me or shoot me a DM on Discord if you want to try it out!
Please do not call me BioHazard.

Nice work on this! Seems like there's a lot of fun options for the player to choose from.

From what you've said, it sounds like you are picking static values for the chance that an attack misses, from both the player and the enemies/bosses. I think what might be better is that the chance an attack misses is greater the lower the attacker's health points are. This would make it more realistic, as someone/something with very low health probably can't fight very well. Obviously it would probably be good to still allow the player to have a somewhat reasonable chance of surviving even at low health, but maybe that is where your potions or whatnot come in.

Of course, this is your game, so feel free to do what you wish.

I like your ideas, so I decided to add them in.

The boss may recover its own HP and SP if the user uses their own items. I may also include a choice where the user can use the fallen players items and stats with their own to fight the boss.

You need Celtic CE installed!
Please do not call me BioHazard.

The game is officially complete! Try it out now! :3

Have you thought of porting this over to Axe? It's a ton faster on axe and creates a whole new range of possibilities. (Also then I could help...)
4 Years in the making!
↑
Quote

DragonScholar71 wrote:
Have you thought of porting this over to Axe? It's a ton faster on axe and creates a whole new range of possibilities. (Also then I could help...)


I have not, since havent developed for monochrome in quite a while. With more awesome programs and other utilities being released on the CE, it makes CE development more fun to do.

I also do not own a monochrome calculator anymore so at this point I am done with monochrome development.
Please do not call me BioHazard.

I guess that makes sense. I'm still exited to see where this goes though!
4 Years in the making!
↑
Quote

DragonScholar71 wrote:
I guess that makes sense. I'm still exited to see where this goes though!


Ill make an update soon, Im toying with the idea of turning this into an full-on RPG game
Please do not call me BioHazard.