"Hacking (Wikipedia)" wrote:
The act of engaging in activities (such as programming or other media) in a spirit of playfulness and exploration is termed hacking. [...] Hacking entails some form of excellence, for example exploring the limits of what is possible,[5] thereby doing something exciting and meaningful.

September 20 and 21, 2014, Cemetech made its third trek to World Maker Faire in New York City to show off Learn Hacking and Coding with Graphing Calculators. As in 2012 and 2013, the focus of our booth this year was to spread the word about graphing calculators as a tool for learning programming and electronics, or "hacking". We showed off the different things you could make graphing calculators do, from networking, to connecting to the internet, to playing music, to running educational programs and games. We also showcased resources for learning to use calculators for math and science as well as for programming. Our displays (click any photo for the full size), from left: the east side of the tent, with networking, internet-connected calculators, and books; calculators networked together; internet-connected calculators; interactive calculators with math and science programs and games; calculators playing music with speakers and a floppy drive.

This year, we had our largest crew of participating Cemetech staff and members yet. I (Christopher Mitchell) was joined once again by Cemetech administrator Thomas Dickerson, Cemetech member Alec Szigeti, and Cemetech and Omnimaga administrator Tim Keller. Cemetech member and Omnimaga owner Nathaniel van Diepen trekked down from Canada to join us in showing off our work as well, bringing along his wooden TI-82 created by Caleb Hansberry as well. We gave out over eight hundred bookmarks with Cemetech's URL and an invitation to join us for calculator, computer, and DIY hardware hacking and programming. We chatted with thousands of people of all ages, some new to calculator hacking, some old veterans with great stories of the early hobbyist community. We found that the students, parents, engineers, and teachers visiting our booth were even more tech-savvy than in previous years, and many were receptive to the arguments for graphing calculators as a platform for teaching programming. Among the interactions that particularly stand out in our minds:
We were thrilled to win two Editor's Choice awards from Maker Faire for our efforts, joining two Educator's Choice awards and one Editor's Choice award that we earned in the preceding two years. We look forward to continuing to spread our message about teaching programming with graphing calculators and to working directly with teachers, parents, and enthusiastic students alike. Special thanks to Tim Keller for spending time, money, and effort to make us very professional-looking displays, and to the whole Cemetech team who helped out this weekend. Thank you also to Peter Balyta and Gayle Mujica for their personal enthusiasm on Twitter and LinkedIn about our participation in the Faire. You can check out our full album of photos from Maker Faire 2014 and an informal video showing our displays. 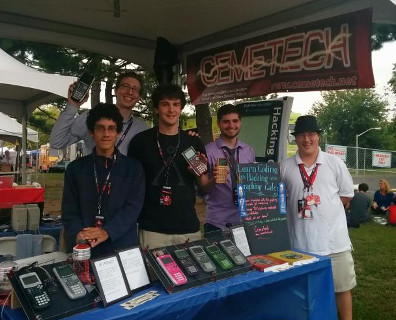 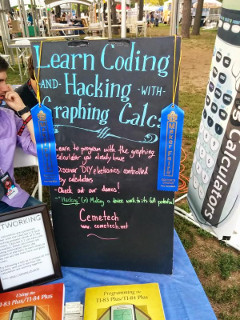