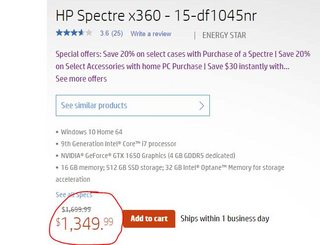 A year and a half later: I ended up getting the HP Spectre x360 13" in Poseidon Blue with the AMOLED 4K screen, 1TB SSD, Core i7-1065G7, 16GB RAM. The machine is perfectly powerful enough for pretty much everything I do with it, but there are some build quality issues and quirks:

So: beautiful-looking laptop, sufficiently powerful for everything I can throw at it, but build quality issues that'll make me think twice about getting another Spectre. I also have barely used the tablet features, so it might be time to reconsider whether I really need to continue getting tablets.

So: beautiful-looking laptop, sufficiently powerful for everything I can throw at it, but build quality issues that'll make me think twice about getting another Spectre.


Join the ThinkPad c̵u̵l̵t̵club. Built like a tank and there is a beauty in the industrial utilitarian design.
TI-84 Plus, TI-84 Plus SE, TI-89 Titanium
↑
Quote

jxu wrote:
Join the ThinkPad c̵u̵l̵t̵club. Built like a tank and there is a beauty in the industrial utilitarian design.
I've actually had a Thinkpad in the past (and a convertible tablet, to boot): ThinkPrhh, a ThinkPad x201t tablet PC. I was indeed reasonably pleased with it over its lifetime, and I think I eventually retired it simply because it was time to upgrade, rather than as with so many of my other laptops my hard use of hardware had made it fail.