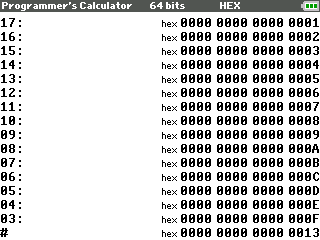 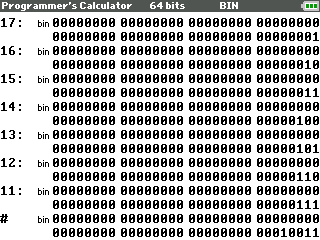 For the approximately none of you who were waiting for me to finish this project, please enjoy version 1.0. It has a very sophisticated widget subsystem that implements the settings dialog (and some other dialogs). It's even got support for modal dialogs. Since I transformed the entire user interface system into an event-driven system, main() is now very short. There's also a manual with a full list of what keys do. 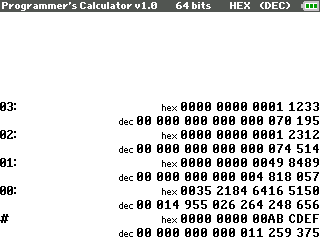 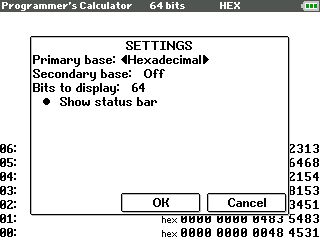 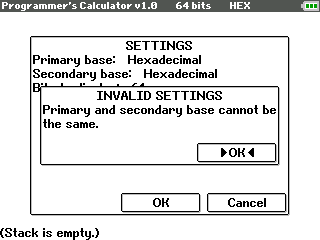 I like the idea of an event driven ui, very slick

I've added some minor improvements to the program: your stack can now be saved and restored when you quit and resume the program, and leading zeros are now grayed out for improved readability. 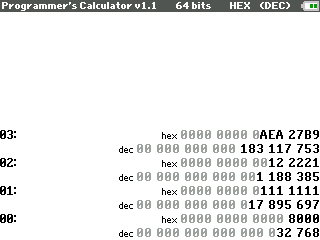 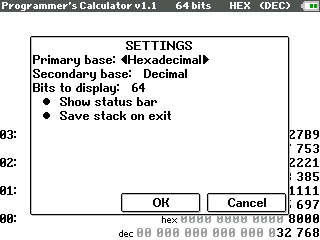 What I really want to know is if people will keep their calculator on their desk when programming so they always have a programmer's calculator handy. I wrote this because I wanted such a thing.
↑
Quote

This looks really nice! If I actually used my calculator any more, I'd probably use this instead of the Windows calculator in programming mode, which is good but not great.

Your post about graying out leading zeros got me thinking: what about leading F's (hexadecimal) for "negative" numbers? Maybe that's a little silly, but perhaps less silly is allowing display bases to be specified as signed, so small negative values would still show up with leading zeros that can nicely be grayed out.
↑
Quote

Oh, this is super-snazzy. While I also tend to use the Windows' calculator's programming mode for my bit/change-of-base computations, this looks like a strong candidate to replace it (especially, as Runer112 said, if my calculator was handy more).

For anybody who happens upon this thread while browsing, this program is also in the Cemetech archives.
タリ · · Ask questions the smart way · · ツイッター
↑
Quote

Runer112 wrote:
Your post about graying out leading zeros got me thinking [about] . . . allowing display bases to be specified as signed, so small negative values would still show up with leading zeros that can nicely be grayed out.

Implemented in the latest release. I've also added options to always display a base on the current input or most recent stack entry. For example, you could have it display a binary conversion just for what you're currently entering, without having to set it as a secondary base that's displayed for every number on the stack.
↑
Quote

Very nice - is the leading zero's feature an option that can be toggled or is it baked into the program?
"My world is Black & White. But if I blink fast enough, I see it in Grayscale."

The formatting code always displays the zeros. I'd have to completely rewrite the display logic to change that. Which I suppose wouldn't be too hard, but I don't feel a particular need for it.
↑
Quote

Oh sorry I meant the leading zero colouring option - I like having leading zero's normally.

Unless that is what you were also referring to?

I haven't updated yet is all, will do when I get home from work

Just for you, I made it a configurable option. Just look at how much code it took to implement that. I'm uploading a new release now.
↑
Quote

Awesome work as always DrDnar!!! I have a calc on my desk permanently and this is perfect.
"My world is Black & White. But if I blink fast enough, I see it in Grayscale."

But I want the leading zeros to be blue, not gray.
↑
Quote

This is really cool!

I agree with MateoConLechuga, it would be cool if you could have custom colors for the leading zeros. (or all the text/backgrounds?)