Probably a very naive question from a (semi-retired) 70 year old Mathematician. Ive spent all my working life in different IT roles. My main areas went from junior Programmer, Programmer, Analyst Programmer, Systems Analyst, Head of IT etc. Ive always been on the (Pure) Mathematics/Algorithmic side of the fence, my practical, Network and EE skills are minimal.
So Ive just received a working TI-95 Procalc. I have a TI-89, 92, Voyage 200 and a couple of different TI-Nspires.
The original cable I believe that would have connected the TI-95 was 10 pin female to 25 pin (centronics?) at the PC end yes? Exactly the same cable was used by the TI-74? They are like Hens Teeth to find one? Even if I did I no longer have an older PC with a 25 pin port. A 25 pin to 9 pin serial adaptor wont work? There was never a working cable that could connect the 10 pin port of the TI-95 to USB?
So heres the naive question → Given that weve always been able to connect 2 identical TI Calculators together with the standard 3.5mm jack cable, I.e. TI-89»TI-89, TI-92»TI-92 etc., would it be possible to connect my TI-95 to either my TI-89,92,200 or Nspire and then use the fact that the 89,92,200 or Nspire CAN connect to a modern PC with an USB port to copy/save/load files back and forth from the PC to the TI-95 by using one of those other calculators almost like a bridge or staging post, especially as Im highly unlikely to ever get/find an interface cable and I lack the EE skills to build a cable or even understand the schematics?
I also understand that there was also a cable that connected the TI-95/74 to a tape cassette for loading/saving programs to tape. I have the TI-95 and a number of working tape cassette players (even a reel to reel!) but again no interface cable or way to make one.
Can anyone help me please?
Denny
↑
Quote

Looks like you asked the same question elsewhere, which points me at some helpful resources at least.

That connector is a "dockbus" connection, which a commenter on stack exchange says is documented in the TI-74 reference manual, with a copy available on some random site. On the 74 it's "hexbus."

Just some initial notes, I'll probably look into this in more detail when I have an opportunity.
タリ · · Ask questions the smart way · · ツイッター
↑
Quote

Interestingly enough there appears to be some form of emulator for this calc?

http://www.datamath.org/Calculators.htm#Other
"My world is Black & White. But if I blink fast enough, I see it in Grayscale."

The short answer to your question appears to be that it's infeasible to use another calculator as a bridge, because the expansion bus on the 74 and 95 is much wider than the serial I/O port on the newer calculators- it transfers 4 bits at a time and has additional signals as well.

The simplest way to interface with a PC might be to act like a tape recorder- use the PC's mic and speaker outputs. It seems to just want a nice clean square wave, so it may even be possible to communicate through your computer's audio interface without any special hardware- just connect pins 3 and 6 to the speaker and mic respectively with a common ground, then a little software might do the job.

Datamath has some photos of the official CI-7 cable, which appears to just be an amplifier with some filtering. The parallel port cable is known as a PCIF and I suspect it just does level conversion, with bus translation handled in software. Unfortunately I haven't seen anything that outlines how the bus transactions actually go when talking to a computer, so it's hard to tell how difficult translating that would be.

Edited:
Never mind, found a PCIF schematic. It's level shifting and some latches for control signals. What kinds of signals go across that while in use remains a mystery. 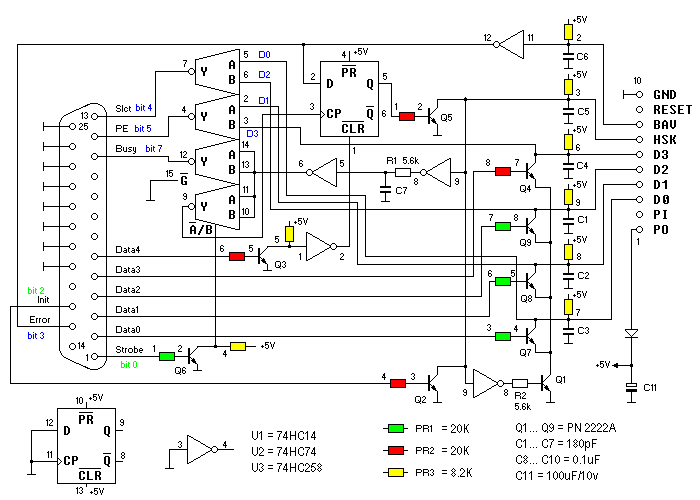 タリ · · Ask questions the smart way · · ツイッター
↑
Quote
Register to Join the Conversation
Have your own thoughts to add to this or any other topic? Want to ask a question, offer a suggestion, share your own programs and projects, upload a file to the file archives, get help with calculator and computer programming, or simply chat with like-minded coders and tech and calculator enthusiasts via the site-wide AJAX SAX widget? Registration for a free Cemetech account only takes a minute.