<!>I will still be working on "Epic Adventure", although progress has been a lot slower recently.<!>

Awhile ago I created a TI-BASIC game in which you had to select which cells will be alive in the next Game Of Life iteration. If you got it right, you advanced to the next level. Otherwise, you would lose and have to restart. It was fun to play, but incredibly slow in-between levels. I decided I would try to remake this game in C to run faster and play better. The TI-BASIC version did not have a high-score system which I will try to implement in this remake. Dynamically sized levels are possible with the way I designed them, but chances are I did it wrong because it worked the first time.

This may be the first game I upload the source for, this game could probably benefit greatly from being open source. For example, the way I allocated memory for levels in the level generation function could be entirely wrong.
Edit: Github source uploaded. https://github.com/slimeenergyreal/gogol

At the time of posting this, I am close to getting the game to a playable state. Note the coloring is not finished.

Edit: Thank you MateoC for pointing out all of the things I was doing wrong!

I was consistently getting ram clears when I reached the win/lose scene. I thought the issue was a buffer overflow involving the level iteration function, so I proceeded to spend a few hours trying different methods to fix this. It turns out, there was a memory leak thanks to the "You reached level %d!" texts. I somehow, eventually found that was the problem. It took less than a minute to fix it once I found it.

A couple hundred lines of code later, the game worked! The changes haven't been uploaded to github quite yet, I'm going to read over the code first and make sure it's neat enough.

Changes:
►Key states now stored as static booleans in functions rather than globals.
►The globals are stored in a game structure.
►"uint16_t"s have been replaced with twenty-four bit integers.
►There is now a timer. (Although, nothing happens when you reach zero, yet.)
►I believe all memory leaks have been destroyed.
►Level generation has been sped up greatly
►The Game Of Life now exists in the "iterate_level" function.
►Probably some other things I forgot about

Edit: The source has been updated on github.

Edit 2:
Fancy backgrounds have been added!
This basically turned out how I had imagined it. Each fancy tile object has three properties. The first two being the grid positions (X/Y), and the last one being the gradient progress. I can configure the speed of each tile and how many tiles there are using macros. The tiles get a random position every time they turn white. 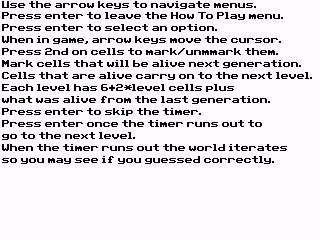 Edit 4:
A Game Of Game Of Life is now archives pending!