This is really amazing work, Mateo; I'm impressed that you wrote it from scratch, rather than port it from any existing open-source C implementation. And you did it so fast! I look forward to seeing how this takes off.

Good job Mateo
Quoting another user without saying anything new is not a permitted type of post on Cemetech.

Although I would like to point out that the libraries are not my work; but rather a combination of a lot of dedicated people

One teensy bug: pressing the sprint button while airborne causes the player to sprint... in midair.
NEEDS MOAR ANS
↑
Quote

Hey CalcMeister, don't double post unless its 2 days old but don't worry I had had to be reminded too XD
I is dumbas*. I can only program a little Basic
↑
Quote

I just realized that "Oiram" is "Mario" backwards. And what's really ironic, is that I read the entire post...
Support the community by joining MyCalcs for free!
↑
Quote

one question, why can't I fire the boss in level 12?
Khang
↑
Quote

huykhang wrote:
one question, why can't I fire the boss in level 12?

Because it is a boss?
↑
Quote

xD What amazed me is that anyone got to level 12
Support the community by joining MyCalcs for free!
↑
Quote

so how can i fight him?
Khang
↑
Quote

Because it is a boss?
In SMB3 Bowser can be killed with fire Mario:

so how can i fight him?


He destroys bricks under him when he jumps. Make him carve a hole so that he ends up falling in.

EDIT: I tried to open it via the catalog (2nd+0) and I got a different message saying "ERR: INVALID"
↑
Quote

thenexithero wrote:
On my TI 84 Plus, I get a message saying "ERR: VERSION"

EDIT: I tried to open it via the catalog (2nd+0) and I got a different message saying "ERR: INVALID"

There are other Mario's that are suitable for the 84 Plus however, namely:

http://www.ticalc.org/archives/files/fileinfo/192/19225.html
"My world is Black & White. But if I blink fast enough, I see it in Grayscale."

I found a glitch with kupas: 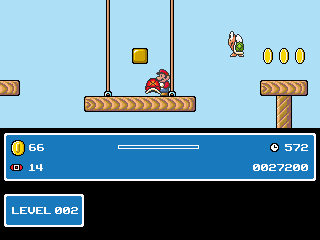 Shhhh no one is supposed to know about that
↑
Quote
Register to Join the Conversation
Have your own thoughts to add to this or any other topic? Want to ask a question, offer a suggestion, share your own programs and projects, upload a file to the file archives, get help with calculator and computer programming, or simply chat with like-minded coders and tech and calculator enthusiasts via the site-wide AJAX SAX widget? Registration for a free Cemetech account only takes a minute.