Overview:
This project was originally intended for my CC23 entry, but since I did not finish I decided to start a new topic for it.

The Idea:
The core idea for the game so far is you are a trainee ninja, tasked with your first ever mission; break into the Dragon Temple and steal the Spirit Scroll. If you succeed, your village will celebrate, and you will be awarded plenty. If you fail, the consequences will be terrible.

The Game:
The actual game will be a simple side scroller, with some puzzles, and a lot of traps. It will include multiple levels, and a boss fight (or two). I'll try to keep it small though so it can fit in one appvar (or two). The code will be written in ICE which is by PT_. 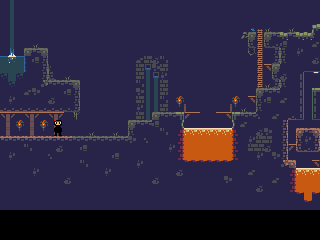 (these are just here as a teaser, I will probably rework the design of the game for optimization)

I will be working on this as my main project, but I will continue to pursue other side projects. That's it for now!

I'll try to continue these posts from the previous forum. I found out why the Tilemap loads so slow (I think). I looked at other games such as Oiram, and noticed that they all draw relatively small amount of tiles on screen compared to what I have. Oiram displays 160 tiles per frame on average, while my program displays 1230 tiles per frame! This is probably why it's going so slow, even after I removed all code except for moving. (it is not my moving code, I've already checked that)
I'll try reducing the tiles displayed per frame to see how much it'll speed up.

I love your graphics, they look fantastic!
Even with such a crazy amount of tiles, can't you use bliting so you don't have to redraw the entire screen every time? Even when scrolling to the side I think you could reduce the number of tiles drawn to just 25 or so.

I don't know what other forum you posted on and what they've recommended so hopefully this was helpful in some way!

Edit: did you mean forum or is this a cross post from another topic?

Thanks for the suggestion, I will definitely be looking into that method. Either way, I will still be scaling the tiles to be twice as large at least because they are pretty hard to see right now.
And sorry, I meant to say topic. The original one was my CC23 entry, which can be found at https://www.cemetech.net/forum/viewtopic.php?t=16073.
Also, I do not own the art so please don't credit me it makes me feel guilty. The art was made by a guy on a game resources site. I'd post the link but it's blocked on my current computer. I will be making my own art though as I have more time now (probably)

You are redrawing the entire tilemap each frame which would be slower but give you the ability to have a full screen of animated tiles easily - if you plan on having animated tiles. Other methods could involce only drawing what you scroll into but that would require you to keep track of animated tiles individually and also also redraw tiles behind sprites to clear each frame etc ... could get a little tricky. Thus far the game doesnt appear to run badly - although that could change with more sprites/objects on screen etc.

EDIT - Also the graphics are great and nice work on crediting the author.
"My world is Black & White. But if I blink fast enough, I see it in Grayscale."

I probably won't be using animated tiles, so redrawing the edge of what i'm scrolling towards is the method I will use. The reason that the game looks smooth and fast in that screenshot is because I'm not redrawing the entire screen, just the area behind the sprite. When redrawing the entire screen (during scrolling), it gets much slower, and would not be very good for a game, especially if I were to add more logic. That's why I need to draw it in a stripe.
P.S. I could not post a link, but the tileset is called "Caves of Gallet." Searching that gets you a couple of results.

Does ICE have a command to scroll the graphics buffer/window?

If so, this would be a lot faster than redrawing the full tilemap, since it would just move data within the buffer (or wrap the starting index), instead of copying the same "new" data into the buffer. Then you would only need to redraw the sprites, tiles behind them, and a thin sliver of the tilemap that just scrolled into view (two edges for diagonal scrolling). IIRC this is how early consoles like the NES handled scrolling.

Yeah, I discussed this with a couple of people earlier and they also said this would be the best approach. The ICE commands to do this are det(47,PIXELS) and det(48,PIXELS) which are shiftLeft and shiftRight respectively. I will not be needing to move the screen up and down so I won't need to use shiftUp or shiftDown. The rest of the commands can be found in the ICE compiler "commands.html"