It has been a while since we've covered news from Texas Instruments themselves, most recently New TI-84 Plus CE Color, OS 5.4, and TI-83 PCE Edition Python last June, and our postmortem of T3IC 2019 last March. Postmortem is the right word, unfortunately, as this year's T3IC conference has been cancelled due to COVID-19 (coronavirus) concerns. Texas Instruments' Teachers Teaching with Technology (T^3 or T3IC) is an annual event where primarily teachers come together to share success stores, lessons, and techniques from using TI calculators and technology (and in rare cases, other edtech) in their classrooms. Cemetech has had a presence the last seven years, including staff like Christopher "KermMartian" Mitchell, Shaun "Merthsoft" McFall, Thomas "Elfprince13" Dickerson, Jon "TheStorm/Jonimus" Sturm, and other friends, family, and Cemetechians. We have worn the multiple hats of Cemetech leaders spreading the word about how this site can be a resource for calculator programs, guides, and questions, teachers sharing TI-BASIC and the value of calculators as programming education tools, and news editors gathering the latest news about TI's new technology. With the cancellation of T^3 this year, we'll be sad to miss a year, but we hope the conference will be back next year, bigger and better than ever.

On a happier note, perhaps announced now due to the cancellation of T3IC, a Python Edition of the TI-84 Plus CE will be coming to Europe. In June 2019, Texas Instruments released the TI-83 PCE Edition Python, a French version of the TI-84 Plus CE with the ability to run Python programs. Because TI was unable to run Python on the TI-84 Plus CE family's own ez80 CPU and its associated RAM and Flash, they first released an external USB module containing an Atmel SAMD21 ARM System-on-a-Chip (SoC) capable of executing Python programs, then later integrated that SoC into the calculator as the TI-83 PCE Edition Python. Now, that same hardware will be coming to Europe as the TI-84 Plus CE Python Edition, as mentioned by critor on our forum and announced in more depth on TI-Planet (and on TI-Education Netherlands, and elsewhere). Per TI-Planet's article, the new European TI-84 Plus CE will likely use the same SAMD21 SoC soldered onto the mainboard, now communicating with the ez80 chip over SPI to run Python programs. Unfortunately, although Python is coming to the TI-Nspire CX II later this year, the community is not aware of any plans to introduce a Python-capable TI-84 Plus CE in North America. 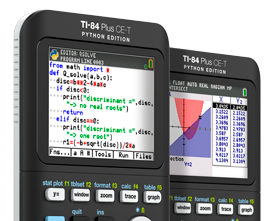