For the seventh year in a row, Cemetech attended Texas Instruments' annual Teachers Teaching with Technology (T^3) conference. This year, yours truly (Christopher "Kerm Martian" Mitchell) was joined by long-time adminstrator and business partner Thomas "elfprince13" Dickerson and Thomas's wife Courtney (the only one of us who actually teaches in a K-12 classroom). This year, the conference was in Baltimore, Maryland the weekend of March 7-10; in the past, we've gone to Texas, Chicago, Philadelphia, Florida, and even Las Vegas for it. Our goals at the conference are always twofold: to teach teachers programming with graphing calculators, and to see how teachers and TI are introducing coding, electronics, and STEM to today's students. Like many of us Cemetechians, we started down paths towards computer science, engineering, and software engineering from humble beginnings in figuring out how to program our calculators. We want to do everything we can to make sure today's kids are still introduced to these vital subjects as early as possible; attending T^3 helps to keep us in the loop of what's going well with those efforts, and what can be improved.

Two of the highlights of the conference were the opening and closing keynote addresses, both by math educators with inspiring messages. The opening keynote address was given by Dr. Ainissa Ramirez, a material scientist and engineer with degrees from Brown and Stanford. After a successful engineering career, she switched to evangelizing STEM, at Yale, via the TED organization, through books, and now at T^3. One of her most impactful messages was that failure should be embraced, not discouraged, and as startup founders and educators, that resonated with Thomas and I. As Dr. Ramirez encouraged, we hope that you too encounter and embrace failures as a learning opportunity! The closing address was presented by Dr. Valerie Camille Jones, who earned her Ph.D. in Mathematics Education at Columbia (and to our fascination, defended her thesis on "The Effect of Computer Gaming on Student Motivation and Basic Multiplication Fluency". Dr. Jones is also a math teacher in Georgia, an active cosplayer, and a highly awarded speaker. She discussed the importance of getting students to think of themselves as math-fluent and to enjoy math, and some strategies she has used in the classroom to make that possible. We were captivated by her successes to date, her enthusiasm for #MathEsteem, and her self-designed outfits and impressive cosplay.

This year, we saw a bigger-than-ever focus on "coding" and on TI's relatively new TI-Innovator Rover. Thomas and I taught two of about 30 programming sessions available at the conference, and attended a number of those other sessions. We also went to sessions on computational thinking, and a few on the Rover. We spotted very few electronics-specific sessions for the TI-Innovator Hub, but as in previous years, there were a number of session on using sensors with the calculators. We particularly enjoyed one session where we taught a Rover to stay on a table by keeping it inside a box drawn in marker, and another where we measured the Rover's movement error and used ratios to determine how to get it to go exactly the distance and direction we wanted. We were disappointed to not see more sessions with the TI-Innovator Hub and electronics components, but we hope those will expand next year as more teachers become comfortable with the tool.

Another new introduction this year was the TI-Nspire CX II, TI's new version of this now 12-year-old calculator line. Information from the internet and our colleagues at TI-Planet suggests that the calculator may have a faster processor and certainly has an upgraded operating system. It brings graphics command support to the TI-Nspire's flavor of TI-BASIC, many more interactive graphing features to support the calculator as a classroom tool, and several CAS and useability improvements. We're looking forward to taking a hands-on look at the new TI-Nspire CX II in a few weeks, and anticipate reporting on its features then.

Every time I've attended T^3, I've taught a session to teachers on teaching programming in the classroom via TI-BASIC. Over the years, it has become increasingly popular, but I've always dreamed of being able to go into more depth and breadth about programming and TI-BASIC. In the past year or two, Thomas and I have tossed around the idea of back-to-back beginner and advanced TI-BASIC sessions, and this year, we were finally able to make this a reality. We discarded the pedagogical component, instead focusing solely on the programming and computer science education. In TI-84 Plus CE Graphing Calculator Coding for Beginners, I started from the very basics, teaching "Hello, World", reviewing simple TI-BASIC commands, and then delving into a prime number-testing program. Even though I had a full hour and a half instead of a mere hour, I still somehow ended up with insufficient time. Lest I forget by next year, I think an ideal beginner class would teach input, output, conditionals, and simple input-compute-output type programs that you commonly see in math and science classes. It would then ideally be followed by an intermediate class that would delve into loops, labels, menus, and other forms of more complex control flow. This could be capped pretty much as-is by the session Thomas taught this year, Advanced Coding on the TI-84 Plus CE Graphing Calculator. Thomas took the computer science approach, teaching the basics of tree data structures before giving attendees the opportunity to complete a set of programs to maintain a tree data structure in TI-BASIC. We were heartened by the results of this experiment, and look forward to refining and repeating it next year. We'll keep you posted on next year's sessions, and if you want to help us teach programming to teachers next year, let us know!

Even in the midst of working hard on Geopipe, it was a pleasure to keep connected to the teaching community. With efforts like our new Cemetech Tools for Teachers, we look forward to maintaining and expanding our support for teachers, students, DIYers, and everyone else. We hope you also get a chance to explore T^3 some year and see a different side of what teachers and TI do with our beloved calculators. 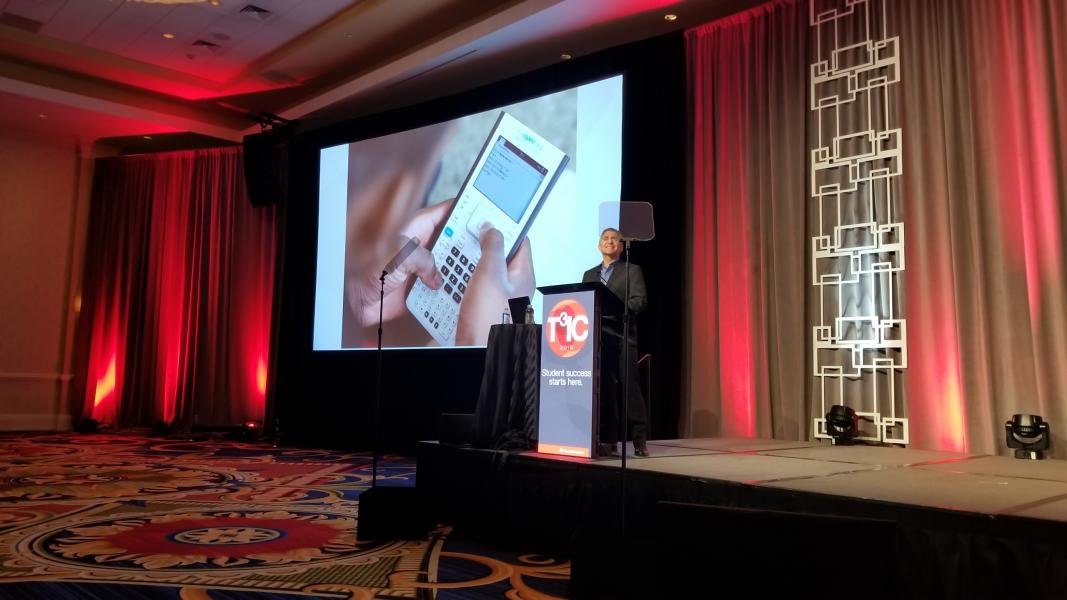