For years, Cemetechian gbl08ma has been a mainstay of the Casio Prizm community here on Cemetech. As a skilled C programmer and systems hacker, he has proven his mettle with widely-used projects like Utilities for the Casio Prizm and the powerful Eigenmath CAS port. He has now shared a new project that he has been working on over the past year, called Clouttery. Clouttery is "the smart, cloud-enabled battery monitor which works with every device", enabling you to see the battery level of all of your internet-connected devices from a unified web console.

gbl08ma kindly explained what motivated him to pursue this project: his own pains points. Some of the best tech we've seen has come out of the innovator's own pains, and that certainly has been the case in this community as well. Not only did he have devices that didn't provide enough current and historical data on battery levels and usage, he also noticed the proliferation of actual and so-called "Internet of Things" devices that people don't remember to recharge. As many of us have no doubt noticed, tech savviness also seems linked to how aware users are of their devices' needs, and gbl08ma wants to make it easy for everyone to have their devices charged and working when they need them. Finally, gbl08ma cites the novelty of a cloud-based battery management system, having previously put superb work into an already-solved problem with his tny.im link-shortening service.

Clouttery currently has clients for Windows and Android, a Chrome extension, and a web management interface. No doubt you're curious about what Clouttery actually lets you do:
gbl080ma is actively working on this project, and some of the upcoming features seem particularly exciting:
gbl08ma has identified potential customers across the swathes of people with many internet-connected, battery-powered devices, people who enjoy statistics and graphs, and people who tend to be forgetful about keeping their many devices charged. Some in our community will no doubt knee-jerk criticize that this project is closed-source and may be a paid service in the future. We, however, applaud gbl08ma's entrepreneurial spirit, wish him the best of luck, and look forward to seeing his progress in the future. 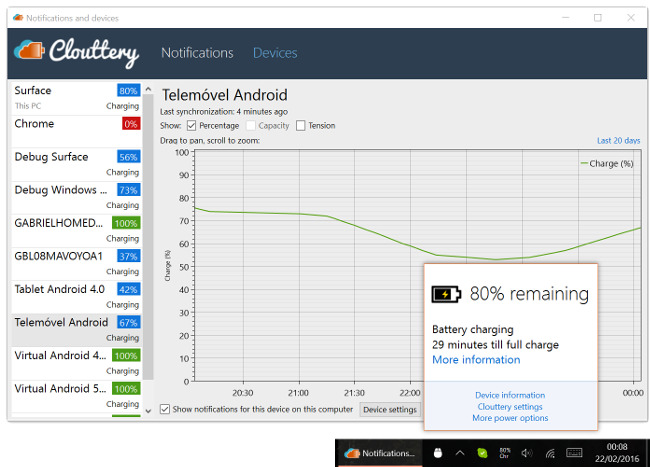