When it was initially released, the TI-84 Plus CE was available in a spectrum of 8 colors. The standard black case was called Classic, and the other options were Radical Red, Positively Pink, Lightning (light blue), True Blue, Denim (navy blue), Silver Linings (gray), and Plum Pi (purple). There are no green, yellow, or orange colors available, although the School Property version of the calculator is dark gray with yellow accents. TI's chart of TI-84 Plus CE colors suggests that six of these colors are available in stores (True Blue, Radical Red, Silver Linings, Plum Pi, Positively Pink, and Denim), Classic (black) may or may not only be available directly to schools, and Lightning appears to no longer be available. However, we saw the very first publicly-released gold TI-84 Plus CE in February at the T^3 2016 conference, and in April, TI teased two new TI-84 Plus CE colors. We correctly guessed that those colors were white and gold, and in late June, the white and gold calculators became available in stores. 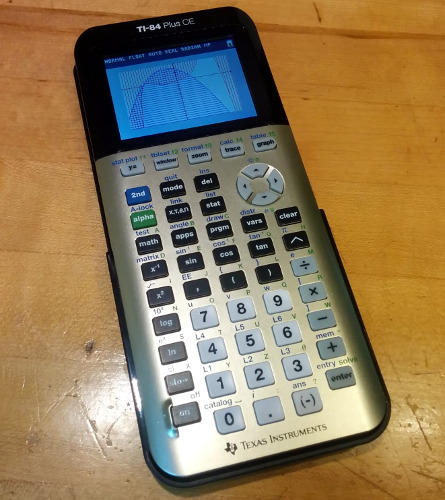 Our friends at TI generously sent me a gold TI-84 Plus CE yesterday; I swiftly set to work using it, putting it through its paces, measuring and weighing it, and taking a look under the hood. I'm happy to share my findings on the gold 2016 TI-84 Plus CE calculator, with takeaways likely relevant to the white TI-84 Plus CE and newly-manufactured versions of the other colors as well.

Feel and Impressions
The most obvious novelty of this particular TI-84 Plus CE is the classy gold face behind the keyboard. It's complemented by a black LCD bezel, a black back case, and a black slidecase. The gold is indeed "classy", not just because of what it is but because of the color chosen, a pale metallic shade with a sheen like the real metal, rather than a gaudier, more mustard color. It appears to be a gold plastic rather than a gold-painted plastic, and therefore the color will not scratch off over time. The shiny black LCD bezel, matte, textured black back, and black slidecase offset the light gold well.

Without its slide case, the gold TI-84 Plus CE is 159 grams, 4 grams lighter than the 2015 Radical Red TI-84 Plus CE. Because the battery is the same and the case design appears the same, I believe the difference is a different, slightly brighter LCD. With its slide case, it is 198 grams, still about 4 grams lighter than last year's TI-84 Plus CE. The dimensions are identical, and it appears that the cases were cast from exactly the same molds. It could be my imagination (or the wear on my keypad), but the keys appear slightly stiffer, a positive attribute that makes it easier to feel when you're hitting the activation point on the keys.

Better USB Port
One of the most frequent comments on my Put Games on your TI-84 Plus CE video, backed up by my own experiences, was that the USB port didn't work well on the TI-84 Plus CE. Specifically, when you plugged a mini USB cable, the calculator would only charge, not transfer files. The first few times you used it, you actually had to push the USB cable in much harder than you would expect for it to fully click into the calculator's USB port, which eluded me and other TI-84 Plus CE owners. Happily, the new TI-84 Plus CEs have no such problem. It looks like TI changed to a new brand or model of mini USB port; both its external characteristics (below) and the view from inside the case show differences. 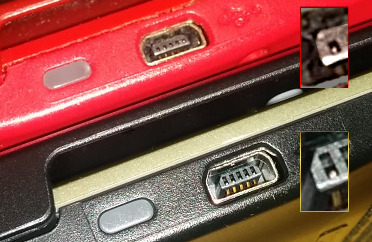 Upgraded SoC (CPU)
As an Electrical Engineer by training and passion, I couldn't resist briefly cracking open the gold TI-84 Plus CE to see what makes it tick. In particular, since I disassembled my Radical Red TI-84 Plus CE to take photographs of its internals, I wanted to see what had changed in the intervening year and a half. The answer, it turned out, seems to be "not much". The mainboard (apparently manufactured by Plotech, according to the silkscreen) doesn't have any obvious layout changes, although its numbering has changed. The SoC, which contains the CPU, RAM, USB controller, and other controllers, is now anchored at its four corners with epoxy, and its markings represent one of the few noticeable changes.

The new gold TI-84 Plus CE uses a newer revision of the System-on-a-Chip (SoC) than the Radical Red TI-84 Plus CE I already owned. As you can see from the photo below, the Radical Red's SoC is marked "ET2014-00 / PHFW2-010/1443", while the Gold's SoC is marked "ET2015-00 / PKC66-010 / 1549". Educated guesswork suggests that the Gold's SoC is revision 1549 of the chip design, produced in 2015, and while the older Radical Red's SoC is revision 1443, produced in 2014. It is not known what improvements have been made, but I know that inquiring minds here hope that the necessary delay cycles for RAM and Flash have been further reduced to get instruction speeds closer to the full 48MHz clock speed of the ez80 CPU inside the SoC. 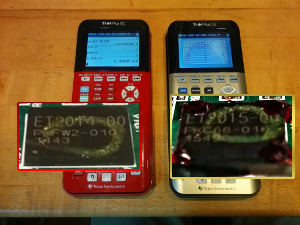 Final Thoughts
The TI-84 Plus CE has already wowed the graphing calculator hobbyist community as a significant step forward in revitalizing the TI-84 Plus family. Although there are some limited grumblings about the fact that we can't create Apps for the device, the availability of C and assembly programming, libraries, full use of a fast ez80 processor, and programs that can be up to 64KB with additional data in AppVars has been very attractive. From an end-user perspective, the thin, sleek package with slightly faster math and graphing and much faster scrolling and screen refreshing makes it feel like a more modern device. I'm happy to see that the new gold TI-84 Plus CE wraps these features in an attractive new package, and once OS 5.2 and the TI-Innovator System arrive this fall, I look forward to using the gold TI-84 Plus CE to further experiment with DIY electronics and the TI-84 Plus family. 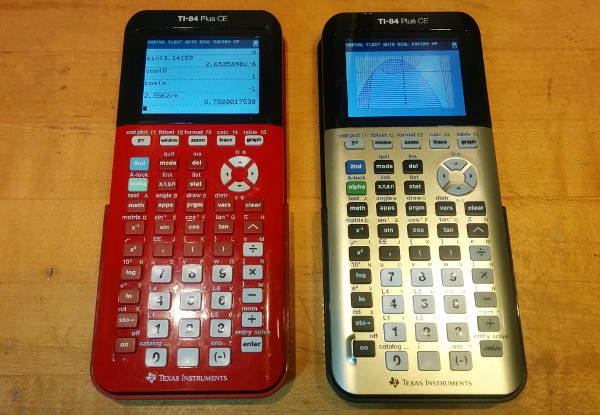