As of yesterday, June 21st, 2016, the illustrious and long-lived ticalc.org has turned 20 years old. For some of our users, this means that ticalc.org has been around for longer than they've been alive. For others of us, we remember the site in some of the earlier revisions and how the site struggled a bit over its first year. Since then, ticalc.org has brought together a great many people, whether people interested in learning how to program (who later went on to that career path because of ticalc) or who were simply interested in the ever increasing list of games and programs that users have written and uploaded to ticalc for people to find and use.

Ticalc celebrated this milestone by getting in touch with members who were once staff, and asking them what they thought about the site in the past, and how it shaped their futures today. You can read their replies here and get an understanding of how things went for ticalc so long ago. One of the original founders, Isaac Salpeter, has even offered to answer any questions that is asked of him in the comments section of ticalc's celebratory news post. Make sure to jump over and get any pressing questions posted up for them to answer before their attention wavers off to other things!

What has ticalc.org meant to you over the years? What role did it play in your development as a student, a programmer, a calculator programmer, or perhaps even as a gamer? Be sure to let us know in the attached thread. Cemetech certainly might not exist in its current form had its staff not been inspired to program calculators and get enthusiastic enough to create this site, so we salute ticalc.org on this memorable anniversary. Here's to the next 20 years!

Looking back on one of our favorite April Fools' Day pranks from recent years, this one in 2014. 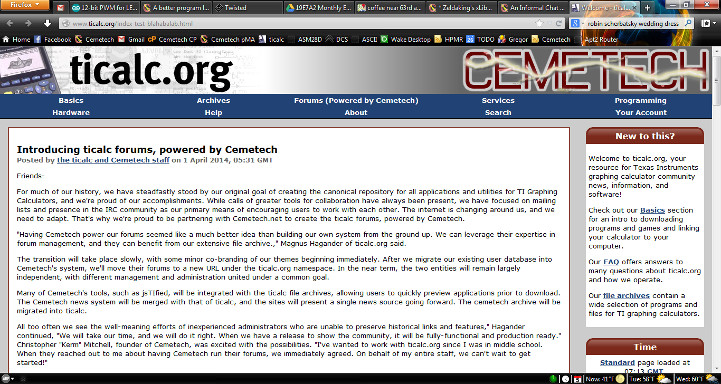