In January, I attended CES 2016, and this month, I had the opportunity to go to the GPU Technology Conference 2016. GTC was notably smaller and less populated than CES, but I expected as much despite GTC attendance doubling since 2012. By 2pm the exhibition floor was not nearly as crowded as it was at 11a after the keynote. Thankfully, unlike CES16 I was able to try an Oculus Rift in 45 minutes. Unlike PSVR at CES I did get a little sense of motion sickness. Now, I'm not one to get motion sickness but I attribute this case to the fact that I was turning my head and piloting the space ship all while planted in a chair. I also found an open-source tool to generate neural network images, plus another website that does this stuff: http://deepart.io.

This brings me into the keynote. I wouldn't have a lot to write about if I didn't get into the keynote. I had a seat right up front behind the rows of press. It started a few minutes after 9am but while we waited there was a great screen saver of sorts on the stage screen. Once underway Jen-Hsun, the CEO and co-Founder of NVIDIA, mentioned the 5 areas he'd be speaking on today: The NVIDIA SDK, Tesla P100, Iray VR, Autonomous Cars plus HD Mapping and, the DGX-1. I didn't take notes during this whole thing and decided to take photos on my phone pretty late through the keynote so I'll only touch on the stuff I remember. 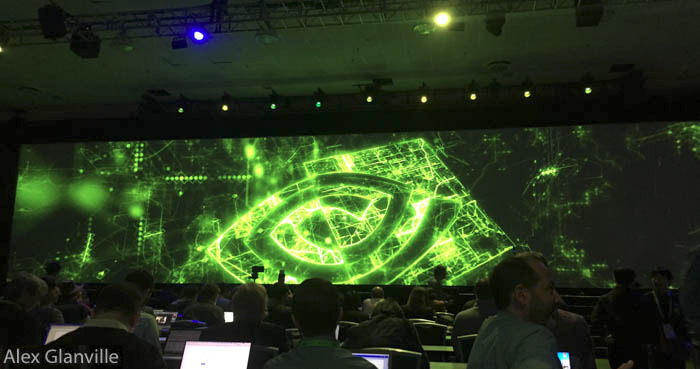