With TI's annual Teachers Teaching Technology (T^3) conference coming up next week, it's no big surprise that TI has unveiled two new TI-Nspire CX-related products. The first is TI-Nspire OS 4.2, a new OS for the TI-Nspire family of handhelds that adds a few new math and science features; the second is a new activity in TI's partnership with NASA entitled "Fuel for the Fire". First, the major new features that TI's email to teachers mentions for the TI-Nspire OS 4.2: A video demoing the new features is available on YouTube, and will no doubt be shown in the opening session at T^3 next week. A more detailed list of the new features is available as well. In addition, we expect that TI will introduce a new TI-Nspire OS soon with features similar to the new Send() and Get() commands added to TI-OS 5.1.5, and based on recent emails from TI, a new STEM tool to experiment with calculators and DIY electronics will be demonstrated at the conference that uses this functionality.

The "Fuel for the Fire" activity for the TI-Nspire CX, part of mISSion imaginaTIon, lets students gain insight into a challenging math concept in the context of designing fuel tanks for a rocket. Students can explore "rate of change" in the context of rocket science as they work to design fuel tanks equipped for space. They play the role of a Fuel Systems Engineer designing a fuel tank, morphing a cylinder into different shapes to see how the shape of a tank affects the rate at which it can be filled. The activity will be available on TI's website today. 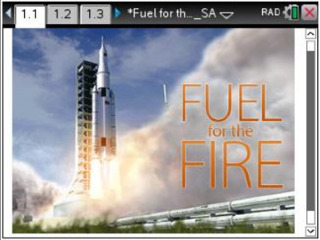