In early 2010, we published a set of rudimentary routines to link graphing calculators to Arduino boards. In the intervening four years, a number of developers have given me feedback on the routines, including features that they'd like to see and improvements that could be made. Those improvements have made their way into a new library called ArTICL (Arduino-TI Calculator Linking). Like any good Arduino library, it contains a set of classes you can use in your own Arduino programs, plus a handful examples made by yours truly and other Cemetech members. We plan to continue to expand the library and eventually create one or more lesson plans that teachers could use to teach rudimentary electronics and programming with TI-83 Plus or TI-84 Plus calculators and Arduinos.

The ArTICL library (pronounced "article") lets Arduino programs send and receive TI link protocol-formatted packets at a low level. In addition, it includes a CBL2 class that lets the calculator emulate either a CBL2 device or a calculator speaking the CBL2 protocol (thanks to Cemetech member CVSoft for helping to make this possible). This means that you can use the Send() and Get() commands on your graphing calculator to control the Arduino, including turning LEDs and motors on and off, reading the state of buttons and switches, and performing measurements with sensors. You could even use the ArTICL library to control a Norland Research robot with an Arduino. The attached topic will be updated as the library progresses. In the meantime, check out the video below demonstrating toggling LEDs on and off with the Send() command on a calculator, and feel free to contribute to ArTICL by sending a pull request on GitHub. 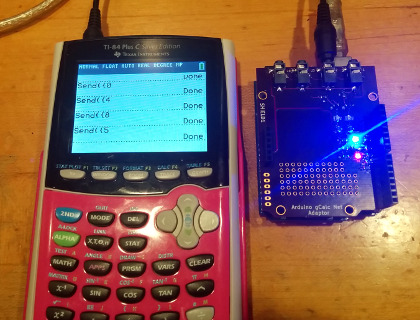