Two weeks ago, the folks from Spark gave us two Spark Core WiFi development boards. These unique boards are based around TI's CC3000 chip, and also include an STM32F103 microcontroller for running user code. One of the key selling points of the Spark Core is that it includes a library providing compatibility with the Arduino Wiring "language". It was the work of two weeks to port my Arduino globalCALCnet bridge (first announced here in 2011) to the Spark Core, then integrate the functionality of the gCn Bridge code.

Previously, connecting a local-area CALCnet2.2 network to the wide-area globalCALCnet network required an internet-connected computer. A piece of software running on the computer, called the gCn Bridge, was responsible for encapsulating incoming packets ("frames") from calculators in TCP/IP packets and sending them across the internet, and unpacking incoming packets to deliver back to calculators. A previous Cemetech project attempted to use the ENC28J60 Ethernet module to directly connect CALCnet2.2 to globalCALCnet, but that project was put indefinitely on hold in 2013. This current project achieves all the goals of that project, and more: it provides a computer-free way to connect calculators to the internet, and lets the calculators independently configure the bridge device as well. The two components that were necessary to make this work are the Spark Core firmware itself, modified and expanded from the original Arduino gCn bridge firmware, and a Bridge Configurator program written in TI-BASIC that is used to set the WiFi credentials and local and remote gCn hub names on the Spark Core.

You can view a video of the device in action below, as well as download the Spark Core firmware and the gCn Bridge Configurator program at the links provided. I look forward to seeing more exciting developments based on this project.

Video of WiFi gCn in action 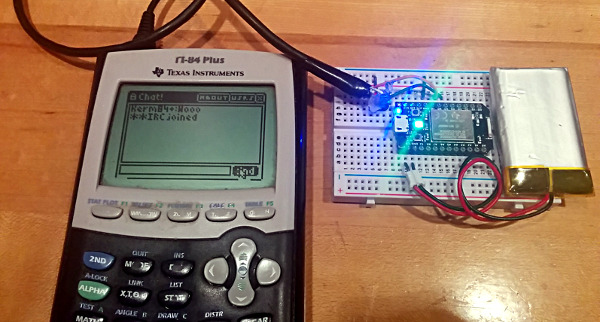