For over a month, as first reported this past Christmas, the TI-BASIC editor and IDE SourceCoder 3 has been back under development. An upgrade of the aging SourceCoder 2 project, it incorporates all of the features from the older tool and adds many new features, wrapped up into a spiffy web application. Spurred by feature requests from the community and newly-feasible technical aspects, I have implemented features like command completion, argument hinting, a sprite editor, and much more. SourceCoder 3 can edit programs, lists, matrices, appvars, strings, pictures, images, and more.

In fact, here's a fairly complete list of the currently functioning features in SourceCoder 3:
:: Editing TI-BASIC programs for the TI-83 Plus/TI-84 Plus and the TI-84 Plus C Silver Edition, Axe programs, and Grammer programs.
:: Syntax highlighting for TI-BASIC, Axe, and Grammer programs.
:: Command completion for TI-BASIC commands and some Axe commands by typing the beginning of a command and pressing Ctrl-Space.
:: Argument hinting and command explanations for TI-BASIC and some Axe commands. For example, typing "seq(" displays the arguments to the seq( function, followed by a brief explanation of what the seq( command does.
:: Sprite editor for monochrome, 3- and 4-level grayscale, and 16-color TI-BASIC and Axe sprites. You can edit existing sprites in programs or create new sprites.
:: Loading, editing, and saving lists and matrices, including importing from and exporting to CSV files that can be used by many numerical programs including Excel and Matlab.
:: Importing and exporting Picture and Image formats for the monochrome and color calculators, allowing you to save calculator images as computer images and convert computer images to be viewable on your calculator.
:: Embedded jsTIfied calculator emulator can emulate the TI-73, TI-81, TI-82, TI-83, TI-83 Plus/SE, TI-84 Plus/SE, TI-84 Plus C Silver Edition, TI-82 Stats.fr, TI-76.fr, and TI-83 Plus.fr. You can send files or projects directly from SourceCoder to jsTIfied and from jsTIfied to SourceCoder, allowing you to test out your programs without installing anything on your computer.
:: Export strings, AppVars, and programs as syntax-colored HTML or BBCode, allowing programs to be posted on personal or school websites or shared on forums.
:: Projects that include one or more programs, appvars, strings, lists, matrices, and real numbers can be stored in your Cemetech account and opened from SourceCoder on any computer. Projects can be imported from calculator files (.8xp, .8xg, and so on) and exported back to such files. 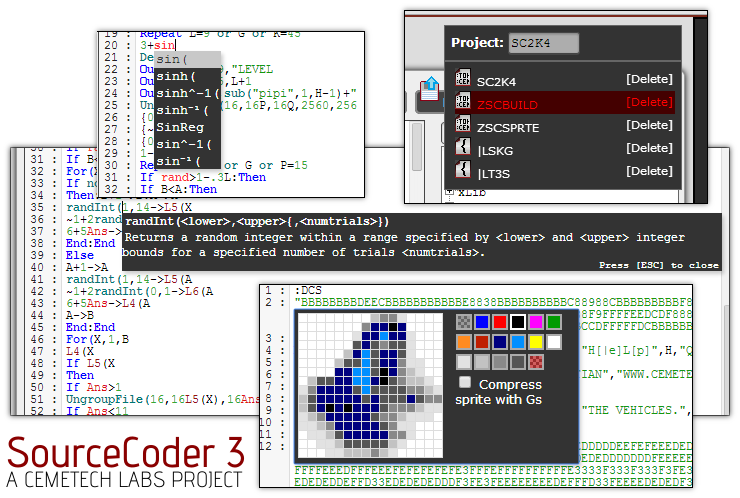