For a second consecutive year, Cemetech showed off graphing calculator hacking at World Maker Faire. This past weekend, September 20 and 21, 2013, I was joined by four other Cemetechians to raise awareness of graphing calculator hardware and software hacking at World Maker Faire 2013 in Queens, New York. I manned the table from 10am each day through late in the afternoon, along with Cemetech administrator elfprince13 as well as members geekboy1011, Qazz42, and mreksm. The name of our display was "Hacking Graphing Calculators: The Stealth Pocket Computer". We won two awards: a second consecutive Educators' Choice Award, and our first Editors' Choice Award! We had eight separate displays, most mounted on spiffy foamcore board (this YouTube video shows most of our displays):

(1) Internet: One TI-84+ connected to an Arduino and my laptop, demoing a guestbook application that geekboy1011 and I designed and wrote together. Visitors could go to a webpage on a netbook or their smartphones, sign with their state, email, and a brief message, and that information would appear on the TI-84+'s screen. Each message was transported from the guestbook webpage onto the IRCHub gCn hub via a Guestbook gCn bridge, over gCn and CALCnet to the target TI-84+, and then displayed on the target calculator via an ASM program written by geekboy.
(2) High School Math, Coding, Games: A regular TI-84+SE, a pink TI-84+SE, a Cemetech-emblazoned Casio Prizm, and a TI-84+C SE, all loaded with the most popular programs and games. These four calculators were meant to demonstrate the state-of-the-art that most budding calculator programmers in school would be working with.
(3) Written Resources: "Programming the TI-83 Plus/TI-84 Plus" and "Using the TI-83 Plus/TI-84 Plus", as well as explanations of the various online tutorials and communities available.
(4) CAS Calculators: A TI-89 Titanium, TI-Nspire CX CAS, and HP Prime, demonstrated the latest CAS calculators available for college, graduate school, and professional users. These served the dual purpose of representing the high-end of calculator capabilities, and exemplifying calculators that aren't the focus of as much hacking effort.
(5) Ultimate Calculator 2: The (in)famous blue calculator with racing stripes, a PS/2 port, a touchpad, and an RGB backlight. I took it apart to show both the front and the back, and added its mouse on the side.
(6) Calculator Music: A TI-84+SE and computer speakers, playing the best of Qazz42's sequencing work using mobileTunes 3.1 and Doors CS 7.2.
(7) Floppy Drive Music: A TI-83+, a floppy drive, and a solderless breadboard demonstrating floppyTunes with a sequencing of "Clocks" by Coldplay and "I Am The Doctor" by Murray Gold. A lot of people said they saw the demo on YouTube.
(8) Networking: Five TI-83+ calculators running the Flourish demo over CALCnet 2.2 and Doors CS, to demonstrate that graphing calculators can be networked together. This was the most popular of the eight in terms of eye candy, and used five different types of TI-83+. 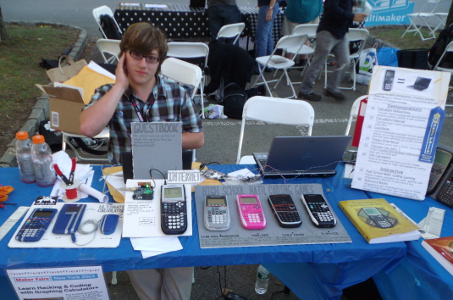 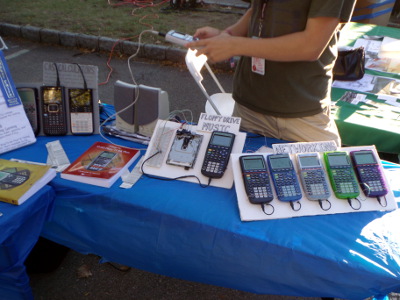 We distributed about eight hundred bookmarks with Cemetech's URL and an invitation to join us for calculator, computer, and DIY hardware hacking and programming, as well as information on my two books. We chatted with thousands of people of all ages, and we made some great connections at the Faire:

:: Brian Benchoff of Hackaday stopped by, and we chatted about what kinds of cool hacks we could do next. True carbon-fiber TI-84 Plus C Silver Edition case, anyone? Although we didn't have anything ground-breaking for him to cover, we did get some great swag, including that Hackaday shirt I'm wearing below.
:: Untapped Cities, a New York City blog, posted an article entitled "10 Gadgets from 2013 NYC Maker Faire You Didn't Know You Needed". Our calculator networking and internetworking projects, CALCnet 2.2 and globalCALCnet, are #2.
:: We saw how young kids immediately would jab at the calculators' screens, assuming that any screen on a small device must be a touchscreen. GT Springer from HP made the same observation when we interviewed him. We also had current students who asked us about putting programs and games on their calculators, and others who wanted to know how they could learn more about calculator programming. We had many TI-84 Plus C Silver Edition owners who wanted a shell and/or programs and games.
:: Like last year, we spoke to many young and old adults who reminisced about exploring hardware and software hacking with their own graphing calculators, way back when.

Thanks to everyone who stopped by the Faire, and thanks especially to my dedicated helpers for volunteering their much-appreciated time. I hope we'll be able to make it three years in a row at World Maker Faire 2014, and I hope I'll be bringing more of the Cemetech staff with me next time! Did you see us there? Any thoughts on the exhibits we showed? Let us now in the attached thread. If you want to join us next year, please also let us know. 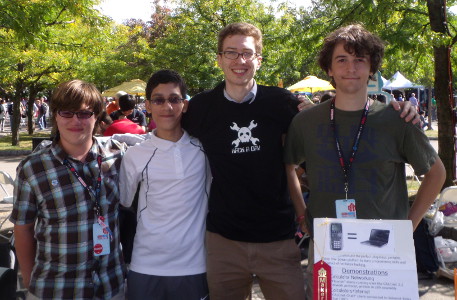 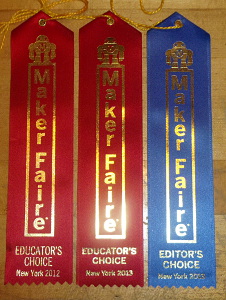