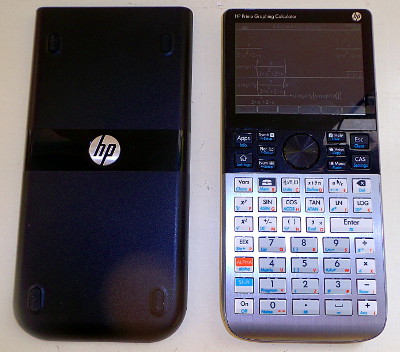 It has been a busy year for color-screen graphing calculators. Two previous color-screen graphing calculators existed, the Casio Prizm from late 2010 and the TI-Nspire CX from February 2011. However, this year has brought us three new color-screen calculators: the TI-84 Plus C Silver Edition, the Casio fx-CP400, and the HP Prime. We learned of the HP Prime early this year, and in May, I had the pleasure of an interview with GT Springer, the Education Solutions Architect for HP's calculator division, about this new calculator. Today, I am proud to present a full, formal hands-on review with a real HP Prime.

Our HP contacts sent yours truly, Cemetech administrator Christopher Mitchell, a preview calculator, the sleek handheld pictured above. In the past three days, I have spent many hours learning to use the device's math, graphing, statistics, and even programming features. Although for my fourteen years of graphing calculator use, I have gained most of my experience with Texas Instruments' calculators, I have long been aware of the passionate, even fanatical devotion for HP's calculators that many of their users harbor. As an engineer, I know that HP's calculators have been heralded as aimed squarely at the skilled college and professional users, whereas many of TI's calculators appeal to a high school and standardized testing crowd. I think there's market demand for both types of devices, but the HP Prime appears to be something new from the company. As GT Springer discussed in our interview, he felt that the Prime will likely appeal to a larger cross-section of graphing calculator users than previous HP calculators. In my experiences with it, I think the device's capabilities measure up to that expectation. In this complete review, I'll show you the device's numeric (non-CAS) and symbolic (CAS) math features, powerful graphing features, and other applications. As the seasoned Cemetech member knows, we are particularly passionate about programming and hacking graphing calculators, so I'll look at the surprisingly fast and powerful programming language included on the Prime. Finally, I'll do a quick teardown of the device, so that you can see what makes it tick. The HP Prime is a fast, powerful, and sleek graphing calculator, and although I am of the cruelly realistic opinion that TI will continue to dominate the US market for high school and college graphing calculators, I think that HP has built a powerful, easy-to-use graphing calculator equally at home in the high school Algebra classroom or the college Electromagnetic Phenomena course.

Summary: The Big Picture
The HP Prime arguably aims to appeal to a broader audience than any other graphing calculator currently on the market. It is meant to provide all the tools that high school students need, students who normally turn to the TI-83+/TI-84+ family, or less frequently, the TI-Nspire CX, Casio Prizm, or Casio fx9860. It also tries to cover the needs of college and graduate students, who traditionally use the TI-89, TI-Nspire CX CAS, or HP's own calculators, and it even sees professionals, about whose calculator choices little is known, as a potential market. In using the Prime, I certainly agree that it has the potential to meet the needs of all three of those markets. It's a sleek, thin, powerful device, and its functionality is about 95% of the way to something I would be happy to use every day for academic and personal projects. The separation between CAS and non-CAS features is a nice touch, not to mention a great way to appeal to standardized testing boards and to teachers. The graphing features are intuitive and ground-breaking in their ability to handle almost any type of expression. In my testing, the screen was crisp and bright, the keys were satisfyingly clicky and responsive, and the battery life was admirable. The touchscreen was a great addition, and although it doesn't really feel like a complete game-changer, it does let you pan and scroll graphs and the Applications menu, and it will definitely be intuitive for younger student who expect every screen to be a touchscreen. I even enjoyed the fact that I could choose a custom color theme for the entire interface, switching from the default white-and-blue to a (in my opinion) classier black-and-maroon.

My criticisms are minor, and as a disclaimer, the calculator I used was an engineering sample with a mid-August build date, so some of the issues I ran into may already be fixed. Anyway, to get that final 5% of the way to a great calculator for me (and other students, teachers, and professionals), my biggest suggestions would be in the area of user-friendliness. Even as a seasoned calculator user well-accustomed to interpreting what my calculator expects, many of the error messages on the Prime fell somewhere between ambiguous and mud. When I was trying to use features, a yellow exclamation mark would occasionally pop up, often without me being clear what I had touched to make the device unhappy. Finally, as someone not accustomed to HP calculators, the use of Views was originally foreign to me, and it took me some experimenting to realize that every application had Symb, Plot, Num, Help, View, and Menu Views. While I now understand it and think it's as reasonable a way to arrange the interface as any other system, I didn't find it initially intuitive. Perhaps I should have just spent a few minutes reading the manual, or perhaps there should be a Quick Start application that teaches you to efficiently use the HP Prime.

If your teacher gives you an option to pick your calculator, or you're in college, graduate school, or the workforce, I recommend giving the HP Prime a look, and see if it is right for you. It certainly has a full complement of math and programming features, and your main obstacle to using it might be teachers and classmates accustomed to other companies' devices. My HP contacts tell me that the HP Prime will be available online on HP Shopping, Amazon.com, Newegg, Tiger Direct, and other online stores in October, and is expected to reach brick-and-mortar stores like Office Depot, Staples, or Office Max in early 2014. The calculator will premier at $150, and every physical calculator comes with the emulator included (and teachers can request the emulator for free). 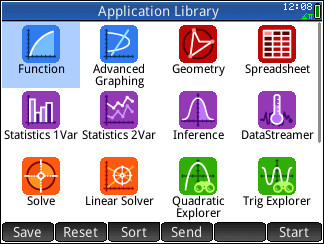 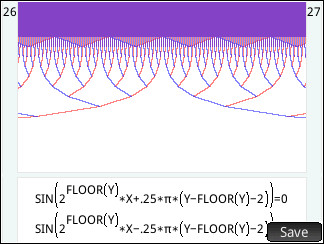