Message from Merthsoft: Hello everyone! TI-Planet is having a neat contest with some cool prizes; check out the details below, posted by critor! The goal is to improve an AI that solves mazes, which I always think is quite cool. The deadline is November 3rd, 2013, so better get started!

According to Greek mythology, under the ruins of the Knossos city in Crete, there's a huge labyrinth, known as the Minotaur's labyrinth.
Besides the huge monster, the labyrinth contains many deadly traps, but also a fantastic treasure...

This myth of a labyrinth containing a treasure guarded by a monster was transposed to video games early in the history of video games. Gregory Yob released Hunt for Wumpus, a BASIC game, in 1972. We over the first graphical version of such a game to Texas Instruments, under the form of a ROM cartridge for the TI-99/4A family-oriented computer, several years later, in 1980.

However, the labyrinth chosen by TI had several constraints, such as having exactly 4 neighboring rooms for any given room. This enabled intuitive moves across rooms through keyboard direction keys, and an easy planar representation, in the form of a grid. 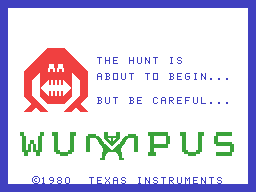 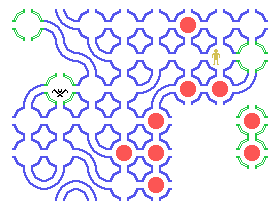 The Knossos labyrinth is much more complex than that, with levels on multiple floors. We can come up with equations to describe this layout, and in TI-Planet's 2013 contest, contestants are challenged to write an efficient, effective AI. Prizes include calculators and TI-Planet stickers.