In light of their longstanding contributions to the Cemetech community, and service as members of our moderation team, Alex "comicIDIOT" Glanville and Peter "Tari" Marheine are both receiving recognition and promotion in the scope of their duties.

Comic has long been working on our mobile web template and assisting with general site maintenance, and was officially promoted to admin status in April of this year. He also visited Kerm in NYC, as part of the long-standing tradition "required" of all new Cemetech admins; pictured below, Comic and Kerm show off a TI-84 Plus C Silver Edition and a TI-Nspire CX, both signed by "Big Bang Theory" actress and STEM proponent Mayim Bialik.

Tari's expertise in both hardware and software have made him an invaluable member of our team, and he is officially now an administrator of the Linux server that drives our website. His proficiency in electrical engineering, especially his focus on embedded systems, makes him a much sought-after contributor in many of our calculator and computer hardware project topics. We look forward to his diligence in helping us keep everything running smoothly on the backend side. 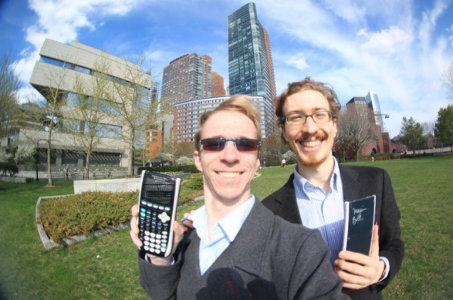