Long have we known that the TI-83 Plus calculator, and its predecessors like the TI-83 and TI-82, can be overclocked by replacing a single capacitor. Those calculators use what we electrical engineers call an RC tank, a circuit created from a resistor and a capacitor that oscillates. You can create an RC tank circuit that oscillates at f Hz by picking a resistor value R and capacitor value C such that f = 1/(2πRC). Unfortunately, RC tanks are quite sensitive to temperature and battery voltage, and tolerances (manufacturing variations) of resistors and capacitors mean that RC tanks in the real world don't produce precise frequencies. Therefore, for the TI-83 Plus Silver Edition and its children the TI-84 Plus, TI-84 Plus Silver Edition, and TI-84 Plus C Silver Edition, Texas Instruments logically switched to a crystal oscillator. Until very recently, we believed that the fixed speed of the oscillator meant that overclocking the later calculators was extremely difficult, if not impossible. However, one bricked calculator and one overclocked calculator later, with extensive photography and co-experimenting help from DrDnar, I have successfully overclocked a TI-83 Plus Silver Edition to run at 6.03 MHz, 15.95 MHz, 19.38 MHz, and 22.416 MHz. 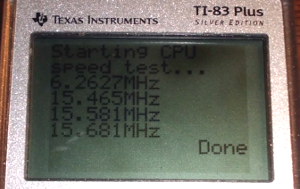 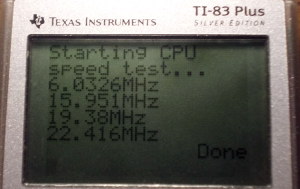 The left screenshot shows the results from DrDnar's CPU speed test on an unmodified calculator, while the right screenshot shows the modified calculator. TI included four speed modes on calculators from the TI-83+SE on upward, but the top 3 speeds have always been approximately 15MHz. Over the past few days, we have experimented with unpopulated resistor locations on the TI-84 Plus-family PCBs, hoping that two unpopulated resistors might enable what we always assumed were planned 20MHz and 25MHz speeds when 0-ohm resistors were added. Although this proved fruitless, we made another breakthrough today when I discovered an interesting mapping of a set of four resistors on the TI-83 Plus Silver Edition mainboard, documented in a Cemetech topic. Much soldering and trial-and-error later, I was able to get the calculator running stably up to 22.4 MHz. Any faster and memory reads and LCD writes get unpredictable. Although ports $2E and $2F can be used to let the calculator safely run at speeds up to an estimated 28 MHz, the effective CPU speeds are actually lower due to the added delays.

As an added bonus, we believe this technique can be used to overclock even the TI-84 Plus C Silver Edition, a modification that I will attempt tomorrow. Combined with Calc84Maniac's discovery of an LCD feature that lets us double the rate at which we can transfer whole screens of data to 10FPS, this modification would allow programs to write the LCD at up to 15FPS. If DrDnar or myself succeed in overclocking the TI-84+CSE (which is now shipping from several distributors), we'll let you know.

My modified TI-83+SE. I added a 4-pin socket to let me easily swap out resistor values