Community members critor and KermM have received preview units of the TI-84 Plus C Silver Edition. A review will be forthcoming soon on Cemetech, so keep your eyes on Cemetech's front page and forum for the math and programming features of the TI-84 Plus C Silver Edition, inside and out. So, over the weekend (and all of today, for KermM), BrandonW, calc84, critor, DrDnar, and KermM been working to get simple assembly programs running on the TI-84+CSE. We made significant progress, and have discovered the following:

The UI feels a little bit sluggish; indeed, simple calculations suggest that this is because the 15 MHz Z80 is just not fast enough to drive such a large display. Adding a faster CPU mode like 20 or 25 MHz (like the TI-83+SE was originally intended to support) would go a long way toward making the UI feel more responsive. Alternatively, a lower-resolution display, automatic 2x or 3x scaling, or a palette-based or grayscale 8- or 4-bit color mode would also do the trick, or perhaps TI could even switch to the fully-pipelined eZ80.

More technically, the controller only accepts 16- or 18-bit color, meaning 2 to 3 writes per pixel. Outputting a single pixel takes at least 29 clock cycles (for filling the screen with a single color). By contrast, the old controller needed about 100 clock cycles per write, but each write could send 8 pixels, so each pixel only averaged 12 clock cycles. So it takes three times as long to write a single pixel (if you want actual graphics), and the screen has 12.5 times as many pixels. The old controller can accept 120 96x64 frames per second (but it only displays at 60 fps); the new one, displaying only a shrunken 96x64 subsection, can only manage 60 fps. So, the maximum frame rate for full-screen display is 7 fps (0.15 sec/frame), and that's only possible if you're filling the screen with a single color. In practice, 5-6 fps (about 0.2 s/f) is the best you can possibly get for full screen graphics.

Critor ran a CPU test program that DrDnar wrote, which was the first program to produce screen output, and the first to produce troll output. KermM is already working to add TI-84+CSE support to jsTIfied. Given that he has a head start and the only major changes are screen-related, he's likely to claim the honor of being the first to add emulator support; however, there is also word of competition from the TilEm team. 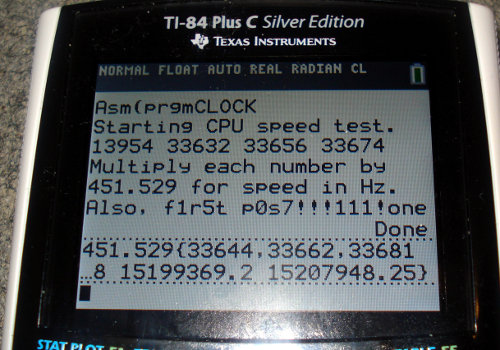