Back in 2010, then-active user Raylin felt that the members of the calculator programming community needed to get to know each other better. To that end, he and I co-founded Have Calc? Will Program!, now written as Have Calc, Will Program or just HCWP. The first episode was tightly-scripted, starting with presentations by four community members about projects and programming tips, and ending with a general discussion period. Though the format gradually shifted to purely open discussion over time, the community (largely Cemetech members) continued to attend the conference, week after week.

After one year, we took stock of a year of HCWP, having hosted 52 Wednesday night programming, debugging, and chatting sessions. Though we have a pretty strict starting time of 8pm Eastern Time, conferences can go for one or dozens of hours. We routinely discuss calculator and computer programming into far into the night, and in several cases our members have seen the sun rise while still working together. Have attended over three solid years of the conference, I can say with certainty that it's a great way to get to know your fellow programmers better, to ask questions and collaborate in ways that aren't possible on IRC or even forums, and to show off your latest works-in-progress, be they games or more serious programs.

For about two and a half years we held HCWP on a service called TinyChat, but as it became buggier and less reliable, we switched to Google Hangouts. We hope to see you around on HCWP every Wednesday at 8pm Eastern Time; just hop on Cemetech's SAX chat or #cemetech on EfNet IRC and use the ~hcwp command to get the current HCWP Hangout link. See you soon! 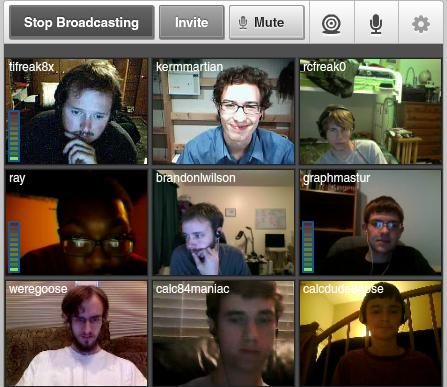