In the year and a quarter that the Casio Prizm color-screen graphing calculator has been available, the skilled coders of Cemetech have been hard at work trying to get the calculator to do everything possible, and then some. Merthsoft created the first Prizm game, I released two more Prizm games and an upcoming 3D grapher, Ashbad created many games, and programmers like AHelper, Eiyeron, calcman, Spenceboy, Purobaz, balping, TheCloak, m1ac4, Sarah, and Nitrosax (among many others) have worked hard to bring programs and games to the Casio Prizm. Several among us have also been working on investigating the hardware itself, and how its capabilities may be stretch. My personal focus has been on the link port, in the hopes that a port of the CALCnet networking protocol might be possible or that stereo audio might be feasible. Sadly, I have demonstrated that the Prizm will not be able to do either of those tasks, but another hardware hacker, Ashbad, has been quite a bit more successful.

With help from AHelper and new member brijohn, Ashbad has finally brought stable overclocking and underclocking to the Casio Prizm. From its base speed of 58MHz, his new Pover add-in can overclock your Prizm safely to 94.3MHz or underclock it down to a stately 3.6MHz. The investigation into what speeds are possible and stable is still ongoing, particularly how speeds of 101, 120, or even 400 MHz might be achieved by adjusting the relationship between the peripheral/RAM clock and the CPU clock, but these preliminary results are extremely promising. Unlike previous attempts, your Prizm will remain stable and functional while underclocked or overclocked, and will not crash. Congratulations to these intrepid hackers, and stay tuned as Prizm hacking and coding continues to heat up! 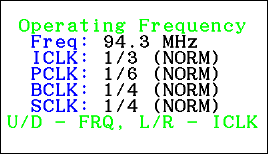 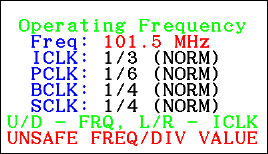