After the previous Cemetech news article revealing that Cemetech Labs would be creating a full-color 3D graphing utility for the Casio Prizm, I've had a few scattered minutes to work on it. Instead of my own half-hearted perspective renderer, I implemented a true 3D rendering engine complete with camera, viewing plane, frustrum, and all those exciting things. I also augmented Graph3DP's CAS, based on AHelper's gCAS2, to be able to handle functions like sin, cos, tan, and sqrt. I implemented rotation, and for fun, made the background switchable between black and white. Check out the video and images below; as soon as I get an equation input routine written (rather than using an equation string compiled into the add-in, here sin(sqrt(X^2+Y^2))), I'll release a demo for you to try.

In other Casio Prizm news, Cemetech member Souvik astutely observed that Casio released OS 1.04 for the Prizm. It doesn't seem to add much more than auto-closing parentheses and tweaks to the Geometry application, but we'll be continuing to investigate what else might have changed. BrandonW and Graphmastur have respectively been sniffing the USB traffic for screen captures and OS updates over USB, so we hope to reveal either information or tools to work with each soon. 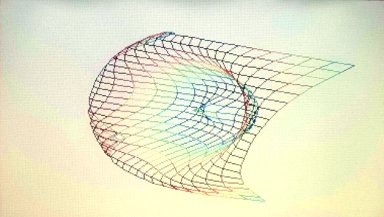 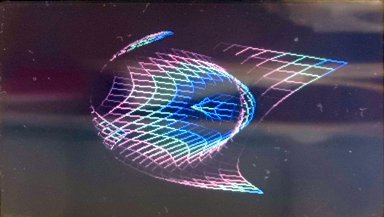