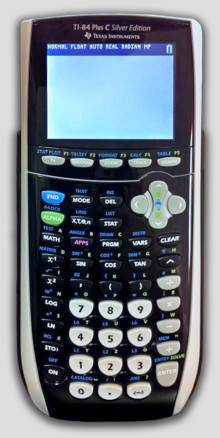 Last Thursday, Cemetech was the first source to break the story of the new TI-84 Plus C Silver Edition color-screen calculator from Texas Instruments. Since then, the story spread to TechPoweredMath, Ars Technica, Engadget, and a popular article on tech site Slashdot. We updated the original article here at Cemetech with details added by Adriweb from TI-Planet, namely that the LCD would be 320x240, the CPU would be a z80, and the battery would be rechargeable. We consolidated all of the known features into an every-growing guide to the TI-84 Plus C Silver Edition, also linked at the bottom of this article.

Now, thanks to a discussion between TI official Dave Philbrick and Lucas of TechPoweredMath, we have important details about the software on the new calculator:

:: The [MODE] menu will be expanded with options to control the new color features, just as the menu was expanded for the TI-84+
:: "[P]rograms that rely on pixel location won’t display correctly due to the TI-84+ C’s much higher resolution". This implies that TI-BASIC programs will have access to all the pixels on the new screen, which is an exciting development for programmers.
:: The calculator's OS will be keystroke-compatible with the existing TI-84+/SE, meaning that existing books and tutorials will apply to this new calculator. It also means that the calculation system inherited from the first TI-82 nineteen years ago is more or less intact, other than the MathPrint improvements.
:: TI will be shifting educator focus to the TI-84 Plus C, but it will not abandon the TI-Nspire at all, according to Philbrick. This debunks my personal theory that the TI-84 Plus C would replace the non-CAS TI-Nspire calculator.
:: Existing z80 Apps will not work on this new calculator. Both TI's Apps and our community Apps will have to be ported to the new device.

These new details mean that both BASIC and Assembly programmers will have a lot of work on their hands converting existing programs to work on the new calculator. What do you think about all these details, now that we have a lot more information about the new calculator? We will continue to do our best to bring you up-to-the-minute news on this exciting new calculator as soon as we have it!

All about the TI-84 Plus C Silver Edition


Breaking!
New images have been contributed by Omnimaga's vijfhoek, and can be found in this imgur gallery. Particularly interesting is the charging port on the side.