As useful as calculators are as a platform for learning programming, for math and science, and as miniature computers, they'll never stray far from their widespread use as gaming devices. From the earliest monochome graphing calculators with low-resolution screens to today's advanced color-screen calculators, games are the perennial "Killer App" for these devices. Students across the world, looking for something fun to do during downtime, inevitably turn to their calculators. Not to keep them bereft of new titles, I would like to present two polished games from Cemetech members, one by recently-returned prodigal son James Vernon, the other a port by Spenceboy98 from previous work by the single-named Nick.

Alien Breed 5 by James Vernon, shown in the screenshot at right below, is a "top-down 8-way scrolling shoot-em-up" (there's a mouthful). It is a remake of a popular Amiga game, complete with 12 levels, tons of weapons and enemies, and fast-paced fun. James was kind enough to return to the community in June 2012 and to start a topic about AB5's development on the Cemetech forum. We watched with rapt attention as he finished the game off at an unprecedented pace, and he has now released this TI-83+/TI-84+ game in the Cemetech archives and elsewhere on the internet. We congratulate him on this excellent game, which has been featured along with an accompanying interview on ticalc.org.

Bloxorz, a Lua game for the LuaZM Lua interpreter for the Casio Prizm, is a sixteen-level isometric 3D puzzle game. You flip an oblong block along a series of platforms, trying to get it into a marked hole while avoiding falling off the edges. To make things more interesting, later levels are studded with buttons that make bridges and platforms appear or disappear. Spenceboy98 ported this from a TI-Nspire game by user Nick, who in turn adapted it from a popular Flash game. You need only LuaZM and an fx-CG10/fx-CG20 to play this game. 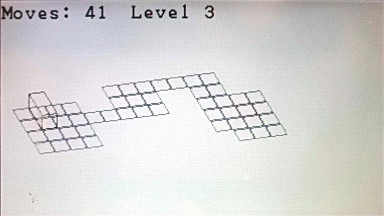