September 29 and 30, 2012, Cemetech made a splash showing off graphing calculator hardware and software hacking at World Maker Faire 2012 in Queens, New York. I manned the table from 10am each day through late in the afternoon; I was joined by Cemetech members Qazz42, mreksm, and elderofmagic. The name of our display was "Hacking Graphing Calculators: The Stealth Pocket Computer". We had six separate foamcore-mounted displays:

(1) Networking: Five TI-83+ calculators running the Flourish demo over CALCnet 2.2 and Doors CS, to demonstrate that graphing calculators can be networked together. This was the most popular of the six in terms of eye candy.
(2) Internet: One TI-84+ connected to an Arduino and my laptop, showing the CALCnet Chat! client connected live to #cemetech on Efnet on IRC. The board also talked about Sandpaper (FTP) and Gossamer (web browsing). Many visitors expressed concerns about possible cheating applications, and asked about a wireless version of CALCnet, prompting a renewed effort on the project.
(3) Floppy Drive Music: A TI-83+, a floppy drive, and a solderless breadboard demonstrating floppyTunes with a sequencing of "Clocks" by Coldplay. I had a partial sequencing of "I Am The Doctor" as well, but sadly it was unfinished. A lot of people said they saw the demo on YouTube.
(4) Ultimate Calculator 2: The (in)famous blue calculator with racing stripes, a PS/2 port, a touchpad, and an RGB backlight. I took it apart to show both the front and the back; if I go again next year, I'll connect the eight points necessary for it to work when taken apart.
(5) Play Games: A TI-84+SE running the Doors CS 7 shell, plus a cross-section of my and others' games from the past two decades of the community.
(6) What's Next: A Casio Prizm with its shiny Cemetech skin, demonstrating Tetrizm, Graph3DP, LuaZM, and others' Prizm games and programs.

We gave out over eight hundred bookmarks with Cemetech's URL and an invitation to join us for calculator, computer, and DIY hardware hacking and programming. We chatted with thousands of people of all ages, some new to calculator hacking, some old veterans with great stories of the early hobbyist community. We also got some great media coverage from the Faire:

:: Brian Benchoff of Hackaday interviewed me for a piece entitled "Giving Graphing Calculators a New Life", in which I discussed our latest work with the Casio Prizm.
:: One of Popular Mechanics' engineering blogs covered our table in an article entitled "The Coolest Stuff At Maker Faire 2012"
:: Mark Frauenfelder, the Editor-in-Chief of Make Magazine, tweeted a photo of Qazz42 in front of our table. Another twitter user also tweeted the Floppy Drive Music display.
:: Mashable's 30+ Amazing Contraptions From Maker Faire NYC article included a slide from our booth.
:: A blog called Hyperbolic Guitars posted an article on the Faire in which they were "much impressed with the cemetech.net group for finally doing something useful with graphing calculators".

Thanks to everyone who stopped by the Faire, and thanks especially to my dedicated helpers for volunteering their much-appreciated time. I hope I'll be able to show off our newest work next year at World Maker Faire 2013, and I hope I'll be bringing more of the Cemetech staff with me next time! Did you see us there? Any thoughts on the exhibits we showed? Let us now in the attached thread! 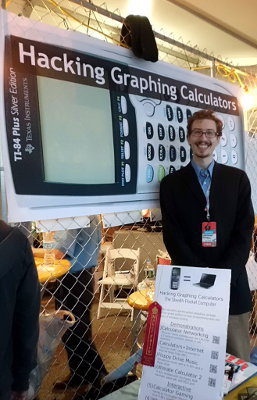 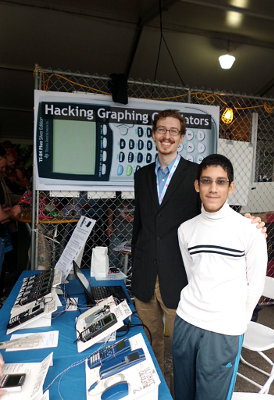 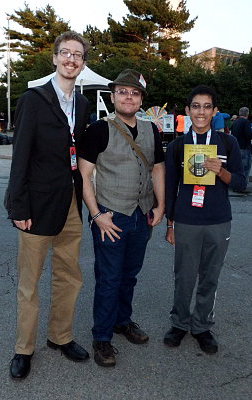