A month and a half after I released my web browser for graphing calculators, Gossamer 1.0 has started to earn some publicity across the internet. It seems it was first featured on TechCrunch early this morning, and spread to Gizmodo soon thereafter. Gossamer works over the CALCnet and Global CALCnet networking protocol, allowing graphing calculators to load and view webpages from the internet. You can download Gossamer from the Cemetech archives; it requires Doors CS 7.2 Beta 2 or higher to run.

In other news, in between assorted work and a devastating life tragedy, I've been making slow progress on other summer projects from my Summer 2011 brainstorming list. The third version of my typing glove, Clove 3, is progressing nicely; this version aims to add much faster and simpler typing as well as a more self-contained design and accelerometer-based mousing to the existing wireless typing abilities. Secondly, I've been working with other Cemetech members to decipher the Casio Prizm token set to add Prizm BASIC support to SourceCoder 2.5, the BASIC IDE for TI graphing calculators that Cemetech has been proud to sport for nearly ten years. Feel free to chime in with comments and suggestions on these and other projects, and let us know what you think of Gossamer.

Edit: Engadget has joined the fray with an article about Gossamer, and Maximum PC magazine has also noticed the project. 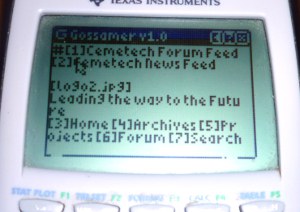 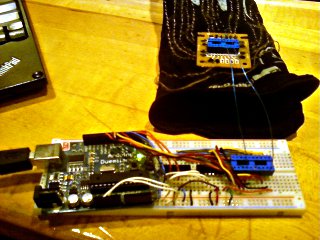