Over the past year or more, more and more Cemetechians have been discussing the building/RPG game Minecraft, a Java game in which players mine for resources, build structures and towns above and below ground, avoid death from monsters, and even build large-scale circuits. Up until this week, I had resisted playing the game on principle, both to avoid yet another drain on my free time, and to show my loyalty to Cemetech's pet project, Freebuild. Unfortunately, at the generous prompting of rcfreak0 and the persistence of my good friend ElderofMagic, I finally gave the game a try this week, and as is common with me and new games, I was immediately hooked.

If you have been living under a rock and are not familiar with Minecraft, it's a singleplayer and multiplayer building game where the world is an infinite expanse of cubes. The ground is cubes of dirt and rock and cubical tress and pixelated animals, under the ground are cubes of rock and goal and gold and diamond and a peculiar substance called redstone, the clouds are pixelated, and even the spiders and skeletons and zombies that appear every game night trying to kill you are pixelated. Your goal is three-fold: avoid being killed, mine resources, and use them to create awesome builds. To start in with the comparisons, the Freebuild concept follows only the last of those unless you're playing a Deathmatch game, in which the first and last apply. I feel that this is a point for both games. Freebuild allows you to build arbitrarily complex structures with no need to get blocks before you can use blocks, and allows you to scale, rotate, nudge, and rearrange blocks to your heart's content. Minecraft (unless you're hacking or an admin giving yourself freebies) forces you to find and collect things before you can use them, limiting the size of your structures and items you can create to what you can find. Tools must be created to mine resources better or faster, and tools degrade over time and are eventually destroyed. Finally, since everything in the game is a cube of the same size, the controls are very simple, as no rotation, scaling, or nudging is possible or necessary.

Minecraft has a bunch of the things I had always wished I could put into Freebuild, especially circuits and trains. The minecart system in Minecraft is fun to work with in my early experiences, but still leaves me wanting more, as it is constrained to the same cubic grid of the rest of the game. The redstone circuitry, though slow and requiring huge spaces to build anything useful, is quite powerful and intuitive, and I feel is a great tool to inspire aspiring electrical engineers. I'm looking forward to exploring these parts of Minecraft more than the building features, and comparing them to the vehicle system in Freebuild. Of course, the Freebuild vehicles work on a real physics engine, and all the complexities that that brings, a positive in terms of all the extra power, features, and realism, but a huge negative for development time. Freebuild has dynamic things like switches and movers, but they don't have the same connectivity that Minecraft's Redstone incorporates.

My overall impression is that Minecraft has a lot of potential, and is clearly extremely addictive, but has plenty of shortcomings as well. On every server that I've visited, players universally curse the name of Notch, and in my opinion with good reason. Although clearly he is a relatively competent coder to have gotten the game to its current stage of popularity and completion, the game has its fair share of bugs, lag, and inefficiencies, in no small part thanks to the fact that it is written entirely in Java. Freebuild wins as a native C++ program with ASM components in its rendering engine, and though it's certainly slower to code and debug C++ than Java, the speed increases are enormous. If Freebuild could achieve builds as large as some of the worlds I've visited in Minecraft without lag, and could provide for a lot more blocks placed with no stretching and no lag, I think it will become a serious competitor to Minecraft.

Please feel free to share your own thoughts and feedback on Minecraft, and on Minecraft in terms of Freebuild. 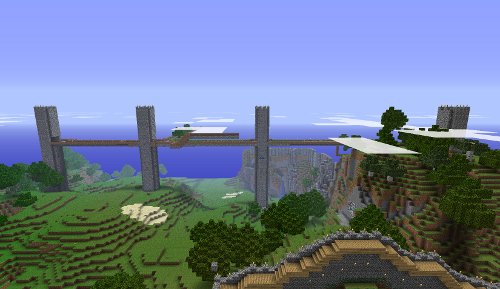 Four of the five towers of the above-ground portion of my Evocat.us empire in Minecraft.