Although the first month of the fall semester has taken a big chunk out of most of our members' traditionally calculator-devoted blocks of free time, several notable projects continue or have started. Our illustrious TIFreak8x has jumped into Prizm coding, releasing Key2Text and Sample Scrolling Menu, two great reference programs for those of you looking to get started with Casio BASIC for the Prizm calculator. TIFreak8x is also starting a port of his Age of Darkness game from the TI calculators to the Prizm; please stop by the thread and encourage him! New user Sarah has jumped right into Prizm BASIC, with projects including the descriptively-titled Simple RPG (though she is open to title suggestions), and a medley of minigames for the Prizm. Dependable Cemetech administrator Merthsoft, as an interim project while he moves to a new state and a new job, has been working on a Periodic Table of the Elements program for the Prizm. In an unusually thorough move, he first prototyped the program's data lookup and retrieval mechanism in C# as a computer application before porting it to C for the Prizm. We wish these and all our authors the best of luck on their projects.

Near the end of the summer, I also added extensive support to Cemetech's well-known SourceCoder 2.5 online IDE for editing TI-BASIC programs. It can now tokenize, detokenize, store, and edit Casio BASIC programs for the Prizm. It also has a complete Prizm editor interface with roughly half of the Prizm's token entry menus already implemented. With Sarah's help, support is also available to tokenize the modified .txt files that the Prizm generates as backups of programs. These additions supplement SourceCoder's pre-existing support for turning color images at sizes up to 384x216 (the size of the Prizm's LCD) into a hex format suitable for use in Prizm C programs. Any bug reports or stories of success from using SourceCoder's Prizm features would be greatly appreciated.

Finally, although it has come to our attention that a new OS update for the Prizm is available. Although it fixes some bugs and adds support for the new .g3e file format, preliminary reports indicate that it has a few new bugs, so we are tentatively not recommending that you install the update. If we receive further reports indicating it is worthwhile, or that a new version is released, we'll be sure to let you all know. Drop us a line if you learn anything new! 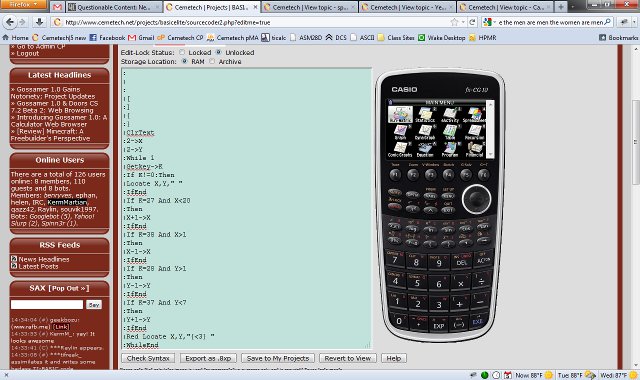