In the midst of the intense Doors CS 7 development that I've been working on for the past few weeks, I ran into a need to re-assemble Document DE 6, now to become Document DE 7 with the removal of some hacks that were necessary to work around shortcomings in Doors CS 6. Unfortunately, in order to do this, I needed to pop open DOSBox, because the linker / bin packer DevPac8x, which I have used for many a year, doesn't work under Windows 7. Today, I realized that a few hours of coding would save me (and other ASM programmers) this pain and suffering, so I wrote BinPac8x v1.0. This simple Python program takes a .bin file, as generated by TASM, NASM, Brass, or a host of other assemblers, and produces a properly-formatted .8xp file. Since it's Python, it's cross-platform, and works under at least Windows and Linux. From the official description:

"BinPac8x v1.0 is a Python-language program that is intended to solve the problem of assembling and linking z80 programs for TI-83+, TI-83+ Silver, TI-84+, and TI-84+ Silver calculators on Windows 7 and on Linux. Previous programs such as DevPac8x were written for a 16-bit environment, and do not run on the DOS emulation of recent operating systems. BinPac8x is a cross-platform solution for Linux or Windows, requiring only Python to function properly. It takes a .bin file generated by an assembler, and turns it into a .8xp file." 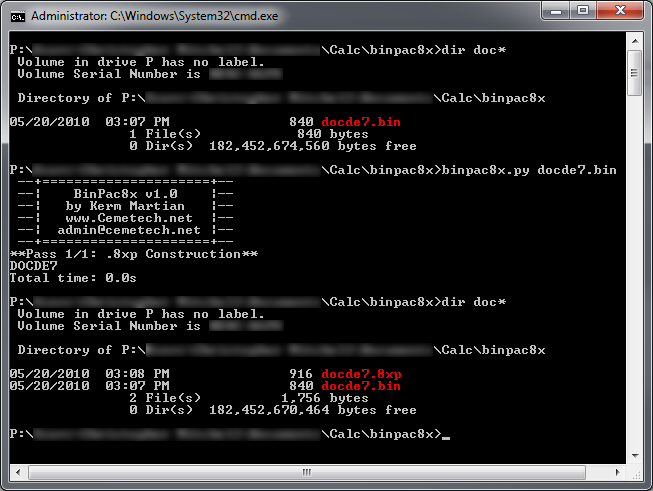