Over the past many years, there have been many, many calculators of the TI-83, TI-83+, and TI-83+SE persuasion that have suffered from the dreaded "black LCD" syndrome. You can power them on and off, you can see them and their contents via linking programs like TI-Connect, but it's impossible to see anything on the screen other than solid black. Over the years, I've been fortunate enough to acquire quite a few such calculators from sources such as colleagues and eBay, but until a few weeks ago, I assumed that the failure was in the tiny surface-mounted black square that takes the 15 pins of signal data from the calculator's CPU and turns it into 96 columns and 64 rows of data (plus contrast and power settings) for the LCD. Fortunately for me, my discoveries of the real solution started with a calculator with a garbled LCD. Indeed, it was a TI-83+ that behaved like a TI-84+ with a bad LCD delay: on the homescreen it was more or less fine, other than a few garbled characters, but launch Doors CS and it suddenly started rotating the screen by 2 bytes (for you non-ASM types, the rightmost 16 columns of pixels pushed their way over to the left side of the screen). To me that indicated some kind of skewing in the data being send to the LCD, but that wouldn't be a true failure of the LCD controller, since the homescreen was fine.

Intrigued, I pulled out my multimeter and checked the ribbon cable connecting the calculator's mainboard and its LCD module. To my great surprise, I found that a few of the connections had resistances at least one or two orders of magnitude higher than the others, even though all appeared connected. I wavered for a bit, then took the plunge. Whipping out my trusty soldering iron, I burned away the metallicized plastic trace from the offending connections, cleaned the respective mainboard and LCD PCB traces, and carefully soldered some 30awg wire into place. After a few adjustments, I turned on the calculator to discover that the LCD was behaving like the day it rolled off the assembly line!

Since then, I have fixed about five calculators in my collection displaying solid-black LCDs or garbled LCD behavior via partial or full replacement of the ribbon cable connecting the LCD PCB and main PCB. The photos below are from tonight\'s adventure, a particularly ambitious one in which I transplanted the working LCD from a calculator with a completely dead mainboard, to a mainboard that showed up on TI-Connect but refused to even display a black rectangle when power was supplied to the LCD. Here are some details of the repair, plus a gratuitous pic of the functioning calculator. 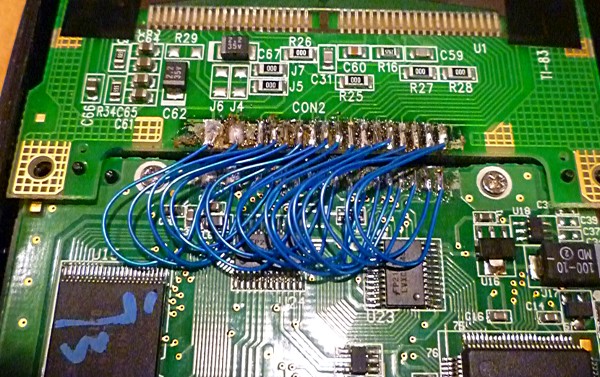 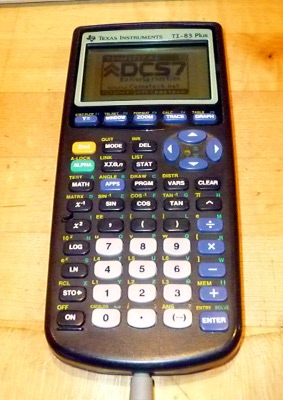