This was an April Fools. Simms AI is nowhere near capable enough to pass a Turing Test, although it's progressing smoothly. I'm working on a technical report about Simms AI v1 that I will be publishing here shortly. Also, my apologies to Dr. Raphan; I looked up people who have worked with neural networking on Google Scholar in case you guys fact-checked me.

It seems only yesterday that I began my most ambitious project yet. In late 2007 I began the project known as Simms AI. The goal was, in time, to create a Turing-capable Artificial Intelligence system, capable of hosting several conversations at one time without confusing them, and at the same time to learn from past conversations. At first I believed this task to be quite difficult, but quickly had a working prototype capable of connecting to the AIM network. I distributed the load across several servers; each server performed a certain role in Simms' neural network. Responses not only had to be believable, they had to be properly timed. I spent many sleepless nights working on the project, and eventually created a program capable of learning that quickly became adept in English grammar. All that remained was to teach it how to think like a human.

In order for Simms to learn, it would have to be capable of obtaining information. To do this, I chose to create a system that would measure the relationships between webpages, and absorb the information within them. To do this, I drew upon my previous project, WordNet. During this learning phase, I also allowed it to talk to various members of the Cemetech community through AIM chat, but I hobbled it's ability to respond, so as to gauge how people would react to an obvious bot. Through this, I was able to teach Simms how to dissuade people who believed that Simms was a bot. In learning a specific set of stimuli, Simms became more realistic. Simms was capable of feigning simple emotions - happiness, anger, and empathy. Someone talking to Simms about how bad their day was would not be asked why their day was bad, but rather be informed of Simms' compassion for the person. I felt that this was a key step in the development of an artificial intelligence program. Simms obtained information extremely rapidly, having indexed over 1,500,000 items of knowledge into his LTM (Long Term Memory) in the first two months of its lifespan.

Flash forward to March 16th, 2009. Professor Martin Raphan of the Courant Institute of Mathematical Sciences at NYU saw my resume, and was particularly intrigued by the idea of Simms AI. Dr. Raphan contacted me about Simms, and offered to sponsor a double-blind Turing test for Simms. I was rather nervous about this, but agreed, under the assumption that even if Simms failed (which seemed likely), I would at least know where I needed to focus my improvements for Simms2. On Thursday, March 19th, Dr. Raphan came to Cooper Union to observe Simms. Satisfied with what he had seen, he set up the double-blind Turing test to take place at Courant on Monday, March 30th. I loaded a copy of Simms' software and database onto an alternate cluster, and took the cluster to Courant, where I was shown to a room. I was given a power strip and an ethernet connection, and told not to leave the room, although the friends who helped me cart my equipment over were allowed to watch the test in progress. Once Simms had participated in 3 separate conversations, I was told to break the equipment down, and I would be notified of the results within 3 business days.

This evening I received the results from the test. It appears that in 2 of the 3 conversations, Simms was picked as the human. Dr. Raphan has not yet forwarded to me the conversations involved, but Simms apparently did very well. So now that SimmsAI is Turing-complete, where do we go from here? 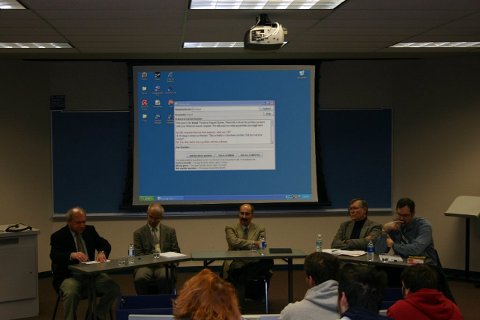