In a shocking series of events, our sources have learned that Kerm Martian, the nerd extraordinaire of Cemetech, may have gone on not one but two dates with a female member of homo sapiens sapiens. This startling occurence appears to have been related to his senior Prom, and a nameless informant claimed to have seen Kerm and said girl eating together in a neighborhood restaurant. Further intelligence suggests that Kerm may have danced at the Prom, although the large quantity of dancing suggested by the report seems unlikely from our previous assumption that Kerm was completely incapable of dancing, socializing, or doing anything other than work, eating, sleeping, and programming. "I thunk that Kerm gots no rhythm, see, but he sure seem to be cuttin' a rug, see, with this chick, see?" added a bystander who spoke with us on the condition of anonymity. Unfortunately, not pictures of either occassion seem to be available at press time, and the name of the girl is unknown, so the veracity of this report is impossible to establish. The CemetechNews network will continue to cover this alleged story as it develops.

Update: A blurry image has surfaced in the seedy back alleys of the Internet that may contain Kerm at the prom. 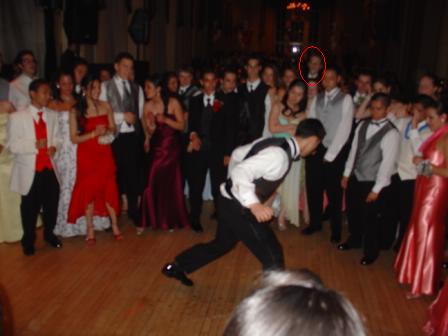