DoctorBacon wrote:
I only have two TI-83+'s. One I found in my house when I moved in, the other had a dead backup battery when I found it at a yard sale. Fixed it, and it works like a charm.

I have an 83 Plus BE and an 84 Plus SE, and my brother has an 84 Plus BE that he doesn't let me touch. I use both of my calcs regularly for link program testing.
Visit Betafreak Games: http://www.betafreak.com
Help Me Pay for College:
- Sign up for Fastweb through my referal link!
↑
Quote

Omnimaga! Click here to give me an internet!
↑
Quote

Sorunome wrote:
So, let's post my (small) calc collection!
Warning: large image
https://img.ourl.ca/rfg/CIMG2929.JPG
Nice assortment, Sorunome! Where did you get each of them? You don't really do much 68k programming, correct?

The TI-84+ I got in 8th grade for math, that is the first calculator I got.
The TI-89 I only got recently (hence no 68k projects yet) for AP calculus.
And the TI-83+SE I got like a week ago for $20 from a friend who doesn't need it anymore, yes, he is aware that he could get a lot more money out of it if he sold it on ebay.

Omnimaga! Click here to give me an internet!
↑
Quote

Mine in order of aquisition:
TI-84 SE
TI-Nspire clickpad
TI-NspireCAS+
TI-82
TI-Nspire CAS+ P1-DVT1
TI-XXXXXXXXXXX (nspire clickpad prototype)
Commodore PR-100 (my dad's friend from work heard that I started collecting and gave it to me)

I recieved a basic nspire from my teacher, raising my collection to 3. i really dont like it 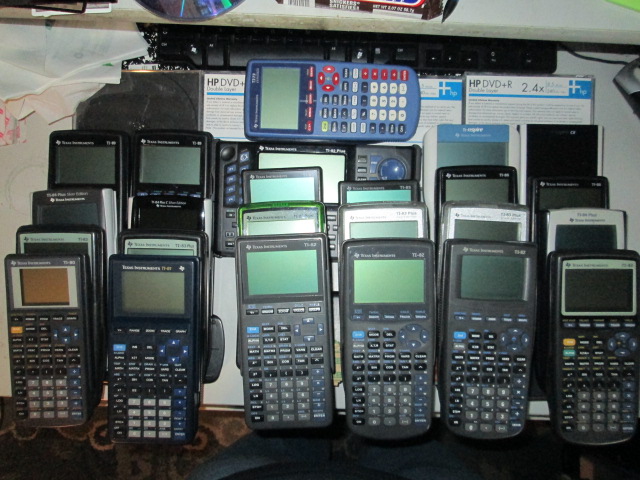 This is strictly TI related calculators. 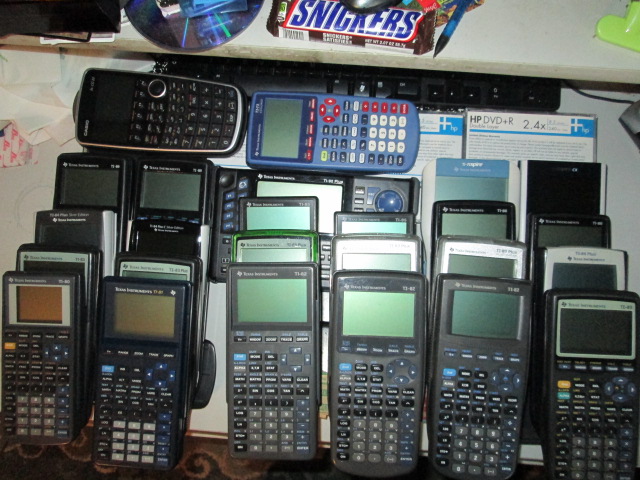 This is my collection in it's entirety.

Plus, I own a TI Keyboard, silver USB link and a few graphlinks. Did I mention I still have original packaging for the 81?

that green case is epic! is that covering the usual casing, or is it actually part of the calc?
Ephesians 1:7, What are you rich in?

They had 2 83+s with color see through cases, the blue and green. I'm still looking to get my hands on a blue one.
↑
Quote

Not if i can find one first! (When i get money to throw around)
Ephesians 1:7, What are you rich in?

Do you still have the original casing for the 84+CSE?
Z80 Optimized Routines Repository | Z80 Float Library(GitHub) | Grammer(GitHub)
↑
Quote

Here's an updated view of my collection: And you've still got me beat in both sheer numbers and variety of calcs. :< I think you only have the 76.fr and 89ti that I don't have that's graphing. Oh, and the class pad.
↑
Quote

Beautiful specimens and I can only express tifreak8x's incredulity in asking if it is true that you have not one but 2 4+CSEs?

What feelings of joy, bliss, and delight must suffuse your heart when you look upon such a veritable Aladin's cave of calculator power! And the glorious ClassPad 330 is in there too. I can only look and marvel...

Kerm, i think you have sufficient calc power to rival something great. but you only have one prizm?
Ephesians 1:7, What are you rich in?

Kerm, i think you have sufficient calc power to rival something great. but you only have one prizm?
Nope, two Prizms. One I bought myself as a birthday present two years ago, soon after the calculator was available in stores. The second one I got as a result of Casio's teacher training program.


Also, I still only have a PRIZm and fx9860, however I just got a SHARP EL-6620 which although not a calculator, is still cool.
Links to my calculator projects