Apparently Puerto Rico just passed a proposal, with support of 60% of the voters, to pursue statehood. Obama (and Romney, not that that is relevant anymore) already announced his support for the measure.

If it passes in congress, what will our new flag look like? How will the House and Senate be altered?

Well, the House and Senate will follow the usual pattern- 2 Senators per state, and then Representatives based on population- in this case likely only one...
The new flag would be interesting, though. How do you really fit 51 stars on a flag? a 3*17 would be rather awkward

I guess I meant more the House than the senate. But 50 states and 100 senators does seem like such a round number!

This doesn't look good, but how could we lay it out better?

Alternating rows of 9 and 8 stars doesn't look that bad. I could see this being used(Note, of course, that this picture is zoomed in on the upper left corner- I couldn't find a better reasonably-sized pic): 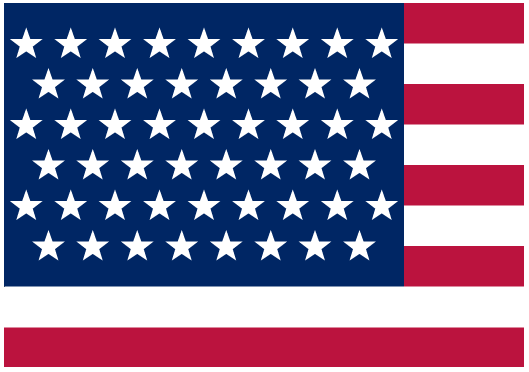 Just for practical reasons, I wouldn't be surprised if the flag didn't end up changing. Maybe the reference material lobby has enough clout to force such a change through though.

I agree with Tari that it seems unlikely to change--that's such a massive undertaking.
Shaun
↑
Quote

We've changed it the last 37 times we added a state, why not this time?

Hehe, the question will come down to: Will China be willing to change their factories to make US flags with 51 states and not 50?

Don't forget most school textbooks, US maps, and tons of flag paraphernalia as well!
Wheeeeee~!
↑
Quote

The textbook industry will be STOKED.

It's only been changed 26 times, not 37. We've had the current flag for 52 years. Granted, the next longest we had it was 47 years, but I think that's probably silly, too. If we do change it, though, we should try for something like the 36 state wagon wheel flag.

As for industries being stoked, think also of all the uniforms, decals on aircraft, and even tattoos!
Shaun
↑
Quote

I love how the main discussion on this point is how to arrange 51 stars; but I'm not surprised either (that was among my first thoughts too)

That's purty. I've been thinking about other arrangements, but haven't come up with anything cool.

I always though that there was real opposition in Puerto Rico was against becoming another Hawaii. The house may look significantly different with 4 representatives to pureto rico.
↑
Quote

@seana11: Yeah, that's what i thought too.
Links to my calculator projects

Here's a good video about it:

You sure like the vlog brothers! Also, as far as I know, there's no legal reason that the House has to maintain it's current size.

I believe the version turiqwalrus posted is the most likely one. (Mathematically it's the only close-packed star option.) Though that circular one and the third one on the Wiki article do look awesome.
shkaboinka wrote:
I love how the main discussion on this point is how to arrange 51 stars; but I'm not surprised either (that was among my first thoughts too)

Pretty much that haha

I was surprised the referendum passedpolls were showing a majority for the status quo, and that's always been the option taken when similar referendums were proposed pretty much once a decade.

Why do we have to use a hexagonal close pack? It's not as if we haven't had other designs before.