It is greatly inspired from artists and bands such as Albion (another electronic power metal artist), Saitama Saisyu Heiki, Stratovarius, Sonata Arctica, Dragonforce, Sabaton, Gamma Ray, Nightwish and many others. However, it is not exactly true metal, since the music was composed with old-school music softwares like Albion did (I use Music 2000, A.K.A. MTV Music Generator, while he uses MODPlug Tracker), rather than real instruments. Also there are no lyrics, so while listening to the album, you might feel like if this music came from some random japanese game or something. Hence why my Bandcamp page refers to 32-bit music (MTVMG being a Playstation game from 1999).

Anyway, I hope you enjoy. You can either buy or listen to the album on Bandcamp! It will remain a Bandcamp exclusive, unlike my past albums, because on iTunes/Zune/etc, anything that isn't pop, electro nor big name artists will not sell enough to warrant paying to get this album there (my previous power metal album is making me lose some money due to this).

I decided to start doing some UK hardcore again recently, since I don't have much inspiration to do power metal music:

Hopefully this becomes a full album eventually. I have other stuff in the works too, although the two power metal songs at the end might not be completed for a while:
(preview of incomplete stuff)


On the other hand, I have removed all but one of my albums from iTunes/Spotify/Amazon, because I was losing too much money on them (the music distribution service I was using had a yearly fee). Only A Decade of Magic Hardcore remains, for the time being. The rest is now Bandcamp-only again until I can afford to put the three others on big stores again via a one-time-fee distributor. The albums are still on big stores for the time being, but it's only a matter of time before they're pulled.

I like all your music, it'd be difficult to say what my favorite is. Even between trance and power metal I couldn't choose only one! I especially like Destiny Knight though (such as Trancing through the 8-Bit Land and Euro Blast from the Past), and anything marked "Euro" or "Disco". Also TotKotM - I think AKoO is heavier, sometimes a little too headbanging for me, though I still like it a lot. But I especially enjoyed Ride through the 4th Dimension and Metal of Time.

Thanks, glad you like my stuff. As for AKoO being heavier, yeah that was my goal actually, especially that most of it started being worked on shortly after attending Iron Maiden, Over Kill and Alcoholica concerts. Of course it's hard to make something very heavy without real instruments, though, so it always has its electronic side.

As for Ride through the 4th Dimension, ironically this is the only song on the first album that got dislikes on Youtube

what would you consider to be the cost of all of the songs you've made compiled into one medium?
Ephesians 1:7, What are you rich in?

It's really impossible to tell sadly. All I know is that until 2013, keeping my 3 first paid albums on iTunes and other big services costed me $34.95 a year and the 4th one, uploaded in 2014, was $49.95 a year (although the upfront cost was lower). If I manually create a CD and jacket it takes about 2 hours without the proper equipment and it's a bit trial and error, so perhaps between $3 and 7 for CDs that won't look so professional. MerchOutfitters charges $10 per CD unless you order them in large amounts IIRC. Audiolife charges under $5 but there are many customer reports about missing songs, artwork, production errors and terrible customer service. Producing the songs themselves costs nothing due to equipment being kept to a minimum (MTV Music Generator/Music 2000 on a Playstation emulator with savestates).

If you are talking about how much I would charge for the songs, then it depends of which songs. Technically, on A Decade of Magic Hardcore, track 15 through track 35 are bonus tracks, as they are already downloadable for free at many other places including Omnimaga. Same with track 21 through 55 on A Decade of Omnidance. The other tracks on those albums are high quality audio or exclusives and this is why those two albums are the same price as my 10-tracks power metal albums. If I was to ever release everything original I made on a single album, I would say $20 combined.

Something a little different: http://djomnimaga.codewalr.us/itstheendofagonychiptune.mp3

I made it using Pocket Music for the Gameboy Color. It's by the same company that made MTV Music Generator/Music 2000 for the Playstation.

I am pleased to announce the release of my two newest music albums: In UK Hardcore and Dance we Trust and Illegal Music Chemistry! Although I haven't done many songs since 2014 ended, my last full-lenght album release was in December 2013 with Ancient Kingdom of Omnimaga and the last one to feature electronic dance music was in early 2009, with Destiny Knight. As a result, many of the electronic dance, chiptune and experimental songs I made after 2009 were never made available on any of my releases, except the A Decade of Magic Hardcore and A Decade of Omnidance compilations, both of which came out in 2012.

Just like every album I released from 2007 to 2008, both IUKHADWT and IMC go the same route as Stratovarius' Intermission: Newer songs with a bunch of older tracks. In fact, In UK Hardcore and Dance we Trust is essentially a reboot of my previously canceled 2009 album Magic Hardcore, which died due to my 2 years hiatus from dance music making. However, like Destiny Knight, this album doesn't feature any track from my old tapes, and this is where Illegal Music Chemistry comes into play. IMC is basically a collection of previously unreleased songs (other than on Youtube, Soundcloud or my two massive hardcore/dance compilations), the more recent ones ranging from synthpop and hi-NRG to chiptune music, while all the 2003 songs are digitally-remastered cassette rips that never made it on any of my older albums.

You can now download the two albums on Bandcamp below, but before you do so, there's more to come: After many years of wait and increasing demand, there will now be physical CD releases of my albums! As of 2017, there are only four physical copies of my music releases in existence, all of which are Ancient Kingdom of Omnimaga Special Edition. For now, Illegal Music Chemistry is setup for imminent physical album release as I wait for a sample copy to arrive to make sure the quality is up to my standards. Once this album is made available physically to the public via Kunaki shop, IUKHADWT and my two metal albums will soon receive the same treatment. While ADOMH and ADOO compilations will never see a physical release, my back-catalogue from 2007-09 will finally get one, meaning that you'll eventually be able to hold a copy of Epic Journey Through the Galaxy, Journey Through the Moon Dark Side, Enter the Dream World, Angel in the Stars, It's the End of Time and Destiny Knight in your hands!

EDIT: Images were too big (replaced them, only to realize that the first edited one was outdated, so I had to replace it again)

Luxen wrote:
what would you consider to be the cost of all of the songs you've made compiled into one medium?
By the way (necroquote time!) Luxen, buying my entire discography at once is now possible, thanks to a new Bandcamp feature. You just have to go to one of the album pages and click the second buy link (which also gives you a discount).


Also I finally made a new song:

It's not my style, but it looks sounds pretty nice!

Sounds great! Definitely has that cool vintage video game style to it

Of course, I must end my post with a question (for some reason I find myself feeling the need to do that

) So here is my question:
I may be one of the few people on here to notice the little "Quebec, 1608" down there, but not sure about the historical significance of 9108, would you mind elaborating on that? Is that just another one of those over 9000 references?
↑
Quote

Sadly the project remained dormant for 8 years, but I am considering resuming it for real now.

This is a thing: This was the free sample that Kunaki gives for new sellers by the way. Quality is similar to Audiolife, with the difference being that the front cover is only two sides rather than four and there's no image under the disc itself (since they use that black CD holder thing)

Based on what I'm seeing and hearing, this means that in the near future, you will be able to buy most of my albums in physical format. The only drawback is that if one album doesn't get a sale for over 180 days, then Kunaki automatically takes it down so I have to re-upload it again. That and the other drawback is the same as every single online CD seller (or even retail stores): Your CD jewel case might arrive with some cracks, but I guess that's life (the worst gotta be Amazon). <_<

Those look awesome! I might buy one or 2 if I can

Those look great! I have to buy one when I can.

Thanks a lot. I'm still waiting for my CD samples, hopefully they arrive next week.

I made a 15th anniversary remix of my first song ever:

This is my upcoming music album, titled Hardcore Spectrum Disorder. It was originally called Elemental Cross and had its own cover made in 2016,
but I changed both title and cover in September 2017 in reference to autism, PDD-NOS and asperger syndrome. 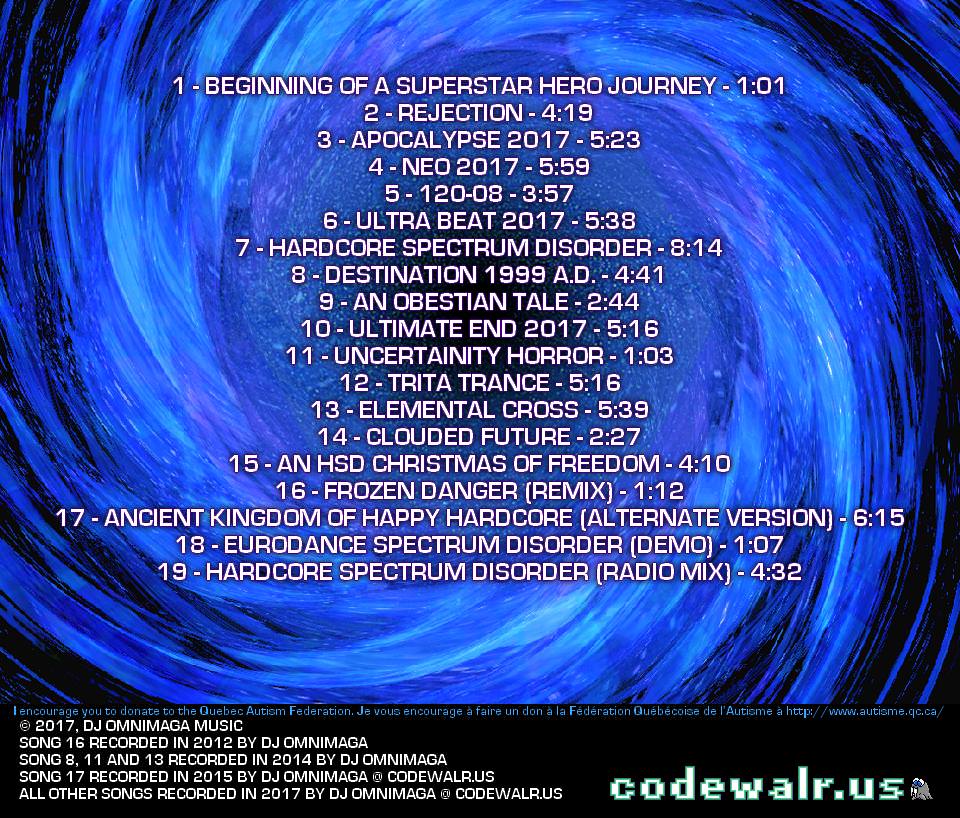 The digital version of the album will be available for download in the link above this Friday and the physical version (compact disc) will be released on April 2nd 2018.

After 3 years of wait, Hardcore Spectrum Disorder is finally out!

It contains mostly tracks created last spring and this fall, including the two major tracks Hardcore Spectrum Disorder and Rejection, which came out on September 27th 2017 and December 1st, respectively. But also it contains some older tracks, including the power metal songs Destination 1999 A.D and Elemental Cross.

The album can be purchased or streamed on Bandcamp and you can get the entire discography at once for 50% off.

I hope you enjoy this blend of power metal, retro gaming music and electronic dance music and I encourage you, like the backcover says, to donate to Fédération québécoise de l'autisme to improve support and knowledge about autistic people in Quebec!