Nicely done! This is coming together very well.

epsilon5 wrote:
Nicely done! This is coming together very well.


The trail is intentional as it shows when wheelspin occurs- its definitely possible to remove it entirely, and I think I might have an idea on how to do that and still indicate wheelspin.

Oxiti8 wrote:
The trail is intentional as it shows when wheelspin occurs- its definitely possible to remove it entirely, and I think I might have an idea on how to do that and still indicate wheelspin.

epsilon5 wrote:
Oxiti8 wrote:
The trail is intentional as it shows when wheelspin occurs- its definitely possible to remove it entirely, and I think I might have an idea on how to do that and still indicate wheelspin.

Not using the current method, no. I tried using a text = a few weeks ago to no avail- but I think I may be able to do some stuff with pt-on instead.

Here's a look at the new effect I came up with: 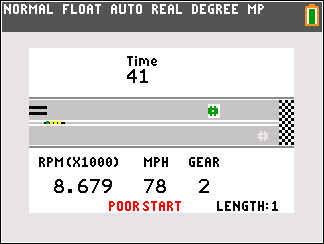 It utilizes Pt-on( to create the two lines behind the car when you have wheelspin.

- Turns out ladder races had a bunch of issues such as not being able to progress past the 27th race and the final race payout being wrong. That's been fixed.

- After realizing that Cesium does in fact support color icons I've made a new DCS8/Cesium Icon for the game: 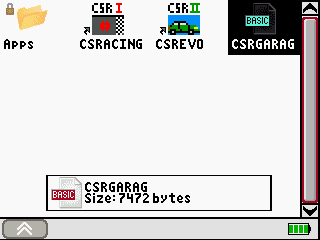 I had to use Wabbitemu and DCS8 for this because CEmu does not seem to cooperate with running any major CE shells
- The Oxiti Increceba (2023) is now obtainable by beating the fifth special event. (Which itself is unfinished...)

I've also now figured out a system to have the player unlock the ability to use custom cars: To use custom cars, you must obtain a "custom car license" (basically setting the custom car slot of the save file to indicate that the car is owned) by beating the final special event, the Tier 3 Championships.

Originally, I was going to have the requirement for unlocking the custom car license be beating every ladder race, but that's a bit too much of a grind to unlock the feature compared to the special events

Car Specific events will also still play a role with custom cars, with you unlocking new custom car body styles (These will be relevant later down the line but not really at release) as you progress.

Beating every car specific race will allow you to make custom cars for any tier, not just Tier 4 like in CSRacing I.

I figure these restrictions are a nice tradeoff in exchange for removing the CR. cost for creating custom cars.

That being said, you won't be able to create custom cars at launch using CSREVO, as I'm going to release a separate program called CSRacing II Car Studio to allow for the ability to store multiple custom cars on-calc (and to allow for one to release DLC cars for the game) simultaneously and potentially use a library. CSRacing II Car Studio will likely be released at either the end of this month or early October.

I've finished adding all but three of the above cars to the game. I'm not too sure on the model year for 2 of them but the rest of the cars and their years are pretty much finalized. 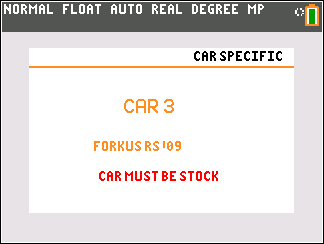 I've already gone into detail on how they work in the past so I won't get into that here. However, there is a new feature where after beating all the Car Specific races, "Car Specific" on the event list is actually replaced with "Custom Spec" unlike CSRacing where Custom Spec was still accessed through the Car Specific menu option.

I am going to delay the release of the game by a day to the 18th rather than the 17th, as this week is going to be a bit busier for me than expected and I want to have a little more time to thoroughly bugtest this before release.

After over 2 months of work, Calculator Street Racing II: Evolution is finally complete!

I've submitted it to the archives, TI-Planet, ticalc.org, and GitHub

Go give it a try!

Turns out v1.0 had a minor bug where weight upgrades were incorrectly applied to the weight value when changing cars.

I've fixed that in v1.1, but also took the opportunity to add a new feature: You can now view your car's gear ratios in the tuning menu by selecting "RATIOS".

There's also a couple other minor changes such as your player ID now being displayed in the records menu as well as a couple optimnizations.

I've submitted the update to the archives.

Here's some of my current best time trials times: 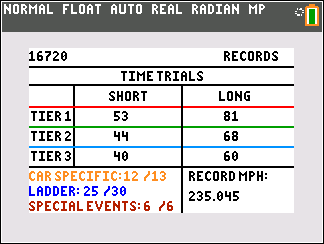 Both tier 1 times were set with a fully upgraded Sacks-O '97, the long time trial run probably wasn't the fastest as the Sacks-O is much more suited to acceleration than top speed and I missed the perfect start on both runs.

Both Tier 2 runs were done in a fully upgraded GTR R33 '97, which as far as I can tell seems to be the fastest Tier 2 car. The Contact LP400 might be a bit faster in the long event though as it has less gears to shift through.

Tier 3 I did in a fully upgraded Oxiti Increceba '23. The tier 3 cars are probably the most varied in their strengths and weaknesses while also all being equally viable- cars like the GTR R35 '17 and Increceba have really good launches but the R35 has the lowest top speed out of the tier 3 cars and the Increceba has the highest top speed, although the Increceba has somewhat slow acceleration meaning it takes a long time to reach said speed. The Enso '03 has low grip but once the tires grip it accelerates the fastest. The 7-11 GT3 RS '16 and the 'Vette '20 are the more balanced of the Tier 3 cars, having good grip and acceleration all around.

Feel free to take a shot at beating my times.

Ive finally finalized the custom car format and added the car loader into CSREVO. Custom cars are stored in appvars that start with the CAR prefix followed by the cars shortname. This format stores the cars performance data as well as its name and color. This format allows you to store as many custom cars as you want on your calculator as you have room for, and also means youll be able to create multiple custom cars at a time on calc without having to worry about them being overwritten.

However, pure ti-basic cannot read from or write to appvars. To get around this, Im using the new Celtic CE library for reading and writing to appvars- this means youll need to have it installed if you want to use custom cars (the rest of the game works fine without it.

This will come as part of version 2.0, which should release sometime this weekend. CSRacing II Car Studio (what youll use to actually make the custom cars) will be released later in February.

In addition to custom car support Version 2.0 also makes a number of fixes and improvements:

- Perfect starts have had their launch speed multiplier buffed from .05 to .12. Before this, Good starts were actually BETTER than perfect starts off the line because they have a multiplier of .1. I intended the effects of both to stack on top of each other originally, but given the game was balanced around this broken effect I dont want a .15 launch multiplier making the game too easy.

- The RATIOS screen in the tuning menu now only shows you the ratios of the gears your car actually has as opposed to the ratios of all 7 possible gear ratio slots.

- The current car name is now displayed on the time trials and machine test results screens. This makes it easier to show off your new records to other people in a single screenshot. in case you actually want to do that

- Fixed an issue where the Camaco SS 69 was incorrectly listed as Tier 2 instead of Tier 1 in the car dealership its the inverse of that pre-V1.3 CSRacing I issue!

This will likely be the last update for CSRacing II assuming I dont find any more bugs. Once I finish CSRacing II Car Studio, Im planning to release DLC Custom car packs every month or so for the next few months until I decide to move onto a potential CSRacing III or I run out of cool ideas for custom cars.
or just get bored Itd be a waste for me to put all this effort into making a custom car format and then just not use it.

Ill also be including one custom car with Version 2.0, the GTR R33 97. This is a conversion of one of the cars already availiable in the game to the custom car format that Ive been using for testing. Feel free to mess around with it in an appvar editor if you want to better understand how the custom car appvars work,or just want to get an idea of how custom cars can be used ingame.

Its taken a good bit of work to get to this point, and I hope youll consider giving creating your own cars a try!