Hot_Dog wrote:
IceWorks wrote:
i am almost done the game and everything looks pretty good. I am loving the game play so many unexpected twists. I also like the super frustrating puzzles and annoying monsters to defeat

Edit: I Found a huge graphical error after the end scene of meg becoming the ambassador. My calculator resets and I lost minor progress in the game.


Ouch! I'm glad you're enjoying the game, and I'm really sorry about the bug. I think I've fixed it, although the file is pending a review.

Sorry about the loss of minor progress. Your saved game will work with Version 1.1 of the game.
Since I'm 99.9% sure, but not 100% sure, the bug is fixed, I recommend quitting the game after collecting 6 bunches of lithium on the last level (the city level). Then your saved game will be archived. If the game crashes again, you'll have lost only 10 minutes of progress, but I'll then test the bug fix more thoroughly, and I'll also be willing to give a "hacked" version of the game to let you view the ending without having to play those last 10 minutes again.


It's taking quite a while for the new file to be approved for posting / downloading, so you can download it here:
https://www.omnimaga.org/ti-z80-calculator-projects/elimination-an-rpg-inspired-by-earthbound-pokemon/?action=dlattach;attach=25794
↑
Quote

While the game is absolutely playable "as is," with lots of positive feedback, there are a few things I'm still planning on doing with this project during my free time:

* A video walkthrough
* Adding weapons effects, something I was going to do originally but ran out of time to do
* Dialogue editing. Some parts of the game's dialogue is unclear / inconsistent, other parts are dumb or sappy and can either be rewritten or removed
* Some more polish
* Some more graphical fixes

I had given some thought to either making a bigger research library in Level 7 or making some kind of Easter-Egg with a secret boss or something. However, I have no ideas for these yet. Another concern is, even though I'm sure no one uses a regular Ti-83+ anymore, I want the game to be small enough to run on a regular Ti-83+.
↑
Quote

Some previews of the effects. 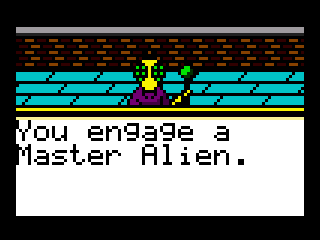 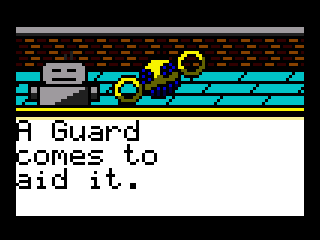 I love the new effects! By the way, for the sake of consistency have you considered a solution about the higher-res text that sometimes appear outside of the game boundaries? If all the battle backgrounds are somewhat dark or medium then I think it would be ok if the text appeared on top of it but with the small TI-84+ font instead.

DJ Omnimaga wrote:
I love the new effects! By the way, for the sake of consistency have you considered a solution about the higher-res text that sometimes appear outside of the game boundaries? If all the battle backgrounds are somewhat dark or medium then I think it would be ok if the text appeared on top of it but with the small TI-84+ font instead.

That's a good thought, but I'm not bothered if I get only 95% consistency. I really like where and how I implemented the statistics feature in terms of the CE. It's also necessary given that I'm using double-buffering and not full-resolution -- the small 84+ font would normally need full-screen resolution to work properly on the CE.
↑
Quote

Is there anyone using OS 5.5 or above? How about a Python or Revision M? I have an older Ti-84+ ce.
I felt that if the game works on an older OS, it should be able to work on newer systems. However, when someone tested a beta for Elimination 1.2, they said it crashed immediately. Can I get a second opinion? Does the game start, or does it crash immediately?

Runs fine on my Python Edition rev P with OS 5.6.0. Maybe check they have enough RAM. I really like the art style and animations in the game!

TheLastMillennial wrote:
Runs fine on my Python Edition rev P with OS 5.6.0. Maybe check they have enough RAM. I really like the art style and animations in the game!


Thanks for the compliment!

I only use "SafeRAM" areas for the CE and therefore didn't think I needed a RAM check. Are there any saferam areas that get used by the calculator in any later revisions or OS versions?
↑
Quote

Are you doing anything regarding port unlocks, such as using SHA RAM for speed reasons?
"My world is Black & White. But if I blink fast enough, I see it in Grayscale."

tr1p1ea wrote:
Are you doing anything regarding port unlocks, such as using SHA RAM for speed reasons?

The RPG has received a major upgrade in the form of version 1.2! You can download it here while Cemetech approves the file.

Major changes
--------------------
* Cool visual effects for when you or an enemy launch an attack
* Jamie now has a scanning computer to tell you what an enemy is weak or invincible against. This was added to address a misconception that some enemies are only vulnerable to the weak "emergency" laser and ion gun weapons. The manual tells you how to use the computer.
* Levels 8 and 10 have been made easier with adjustments to the save game / load game locations
* Fixed a rather noticeable bug where a player jumped from level 1 to level 49 after attacking only one enemy
* You now recover all health as a reward for finding minerals

Other changes
-----------------------------
* Adjustments to enemy placement
* Graphical fixes
* Gave a few enemies additional vulnerabilities
* Dialogue changes:
--- Fixed some plotholes
--- Additional clarification for solving puzzles
--- Removed / adjusted some cliched or "sappy" lines of dialogue
* Fixed a bug where Megan could cause a non-existent enemy to attack when facing groups of enemies
* The game will now tell you if you haven't loaded the correct version of the appvars

I may or may not make these changes to the Ti-83+ version. At the moment, I have less free time.
↑
Quote
Register to Join the Conversation
Have your own thoughts to add to this or any other topic? Want to ask a question, offer a suggestion, share your own programs and projects, upload a file to the file archives, get help with calculator and computer programming, or simply chat with like-minded coders and tech and calculator enthusiasts via the site-wide AJAX SAX widget? Registration for a free Cemetech account only takes a minute.