Last year, Linus Tech Tips did a video on water cooling a TI-84 Plus. I actually helped Alex with the electrical details of how to do it (and got some nice swagit's genuinely quality merch). Remembering that the graphite in pencil lead is actually conductive, I jokingly suggested that maybe a pencil would do the trick. Then I thought, you know, maybe I should actually try it.

So I sent Alex a follow-up email. Unfortunately, by then he had already desoldered a resistor from his calculator (and burned a pad off, which is why I never tried it myself). Sorry bro, I guess.

Anyway, here's my guide to overclocking a TI-84 Plus (or TI-89 Titanium) with a pencil.

Caution: Overclocking your calculator can cause instability. For unrelated reasons, it's also fairly likely to break the graphics in games.

How does this work?

Modern CPUs typically get their clock timing from a VCO in the chipset and a PLL in the CPU, while older CPUs often used a quartz crystal tuned to display's pixel clock. The TI-84 Plus (and other pre-Nspire models) uses neither technique. Instead, it uses an old-school RC (resistor-capacitor) oscillator, similar to how a 555 timer works. Both the resistor and capacitor are external components (from the main logic chip), so they can be modified.

You can increase an RC oscillator's frequency by reducing the resistance or capacitance, but it's easier to adjust the resistance. As I mentioned, the graphite used in pencils is conductive, but it's not a good conductor, which means it can be used to literally draw resistors. So the idea here is simple: use a pencil to draw a conductive mark across the resistor, reducing its resistance and thereby overclocking the calculator. As a bonus, pencil marks are easily removed, so if overclocking seems to make your calculator unstable, you can just wipe the resistor clean.

How do I actually do this?

This overclocking technique works on the TI-84 Plus and TI-89 Titanium. On a TI-84 Plus, you can test your CPU's clock speed with a program I wrote. This can also be adapted to work on the TI-83 Plus other Z80-based and 68K-based TI models. However, we can not overclock the eZ80-based TI-84 Plus CE, and overclocking the Nspire requires software hacks.

You'll obviously need a graphite pencil. I personally use HB lead mechanical pencils, but regular #2 pencils can also work. Note that colored pencils will definitely not work, as they use a wax-and-pigment system instead of graphite-and-binder. Not all pencil leads are the same, however; I have found that darker-marking lead tends to work better, but I have limited experience so experiment on your own.

To disassemble the calculator, you'll need a small Philips head screwdriver to remove the screw holding in the backup battery. The six main screws holding the case together have a Torx T6 head, but the screws are buried deep in their holes, so you'll need a screwdriver or bit with a long shank. Once the screws are out, flip the calculator upright and use an opening pick (or, if you're bold, a long fingernail) to pry the two halves of the case apart.

The resistors controlling the TI-84 Plus's CPU speed are located on the bottom right of the main chip. They've been labeled R07D (fast mode) and R08D (slow mode) since at least 2008. There have been some minor revisions to the PCB over the years. Here's a picture (courtesy of Adriweb) that highlights the resistor you want to draw on (older TI-84 Plus shown here): 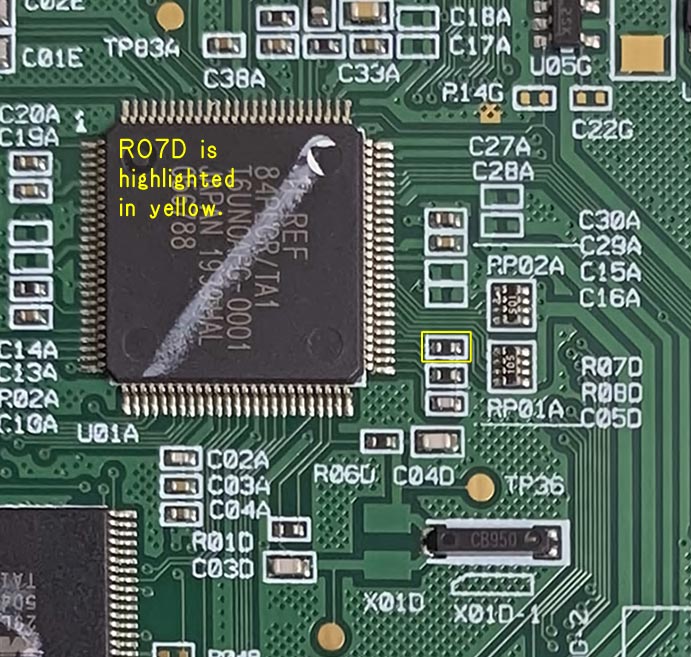 The TI-84 Plus has two resistors you can adjust. I suggest only adjusting R07D, because adjusting R08D will overclock slow mode, which will likely break games. However, if you don't mind the danger of graphical corruption in games, you can also adjust R08D. Doing so will also provide an additional boost to fast mode. I've gotten up to 20.5 MHz with just adjusting R07D, and I recommend against going any higher unless you like getting randomly wrong answers on your exams.

Here's some pictures for the TI-89 Titanium if that's what you want to overclock. This is great if you find BASIC runs too slow. (And AMS's BASIC is notoriously sluggish.)

You can apply modest pressure to the top of the resistor. However, these SMD resistors are somewhat delicate and pushing too hard (especially on the sides) can break them off. This is less likely with a mechanical pencil, as the thin lead will break before the resistor.

If marking on the top of the resistor doesn't get you enough of an OC, applying graphite to the sides of the resistor also helps. I suggest holding your pencil at an angle to a sheet of paper and shading in an area on the page until you get a nice flat section on the tip of the pencil's lead. This makes it easier to get a flat face on the lead that can mark the side of the resistor.

How do I undo this?

To undo the overclock, just wipe the graphite off the resistor. Gently rubbing with your finger can do most of the work. There is no need to get 100 % of the graphite off.

How fast will my calculator go?

While in modern devices, the limiting factor for CPU speed is heat and power, the limiting factor for these graphing calculators is actually data: the calculator uses XIP flash memory for the OS, and the flash memory in the TI-84 Plus is only spec'd to 20 MHz. Anecdotally, calculators seem to tend to become unstable around 22 MHz as the flash chip is no longer able to deliver instructions to the CPU as fast as the CPU requests them, causing corrupted reads so the CPU executes garbage. The temperature of the CPU will not be measurably affected. Overclocking does not affect the lifespan of the flash memory.

The TI-89 Titanium has a different flash memory, and due to differences in the CPU architecture, it looks like speeds closer to 25 MHz may be attainable.

I've heard reports of TI-84 Pluses factory-clocked to 17 MHz. TI's internal spec for CPU clock speed accuracy is ±20 % (RC oscillators just aren't very accurate), which is why they try for a nominal 15 MHz and not 20 MHz. They also want to keep a fair margin from the maximum spec of the flash chip in order to guarantee reliability.

Personally, I was easily able to get 18 MHz on a TI-84 Plus that was factory-clocked to 16 MHz. With some extra work, I got up to 20.5 MHz, and by adjusting R08D, I got over 22 MHz. The extra speed didn't seem to cause any stability issues for me personally. However, reliability above 20 MHz is highly variable because you're operating the flash memory out-of-spec. My TI-89 Titanium was factory-clocked to 13.1 MHz, and I got 22.0 MHz with my trusty pencil. Oh, and the TI-84 Plus C SE (not to be confused with the CE without the S) is actually tolerable at 20.3 MHz. It's still sluggish, but it's much more tolerable.
↑
Quote

Now that's a nice write-up! I suppose the main drawback of drawing on your resistors is that it's more difficult to adjust the CPU speed, whereas if you do some soldering you can add an easier-to-adjust potentiometer.
タリ · · Ask questions the smart way · · ツイッター
↑
Quote
Register to Join the Conversation
Have your own thoughts to add to this or any other topic? Want to ask a question, offer a suggestion, share your own programs and projects, upload a file to the file archives, get help with calculator and computer programming, or simply chat with like-minded coders and tech and calculator enthusiasts via the site-wide AJAX SAX widget? Registration for a free Cemetech account only takes a minute.