I though that it was just a meme but sure enough Wall Street Journal and The Verge are reporting that Microsoft and Discord are in advanced talks on the matter.

However, do not panic.
There are perfectly viable alternatives such as Matrix and Telegram.
Both of which are Free and Open Source Software, with the former having the advantage of also being decentralized: with many of its servers being run by it's own users!
Since both are FOSS, Matrix is Apache Licensed, and Telegram is GPLv2 Licensed, it is far less likely to be buy-able.


All I know is I don't trust Microsoft. Or any big corp for that matter.
The filthy rich need to keep their grubby hands off of good software.
Let's just hope that schools won't suddenly start using Discord once they're owned by a corporation, that'd be real ironic. 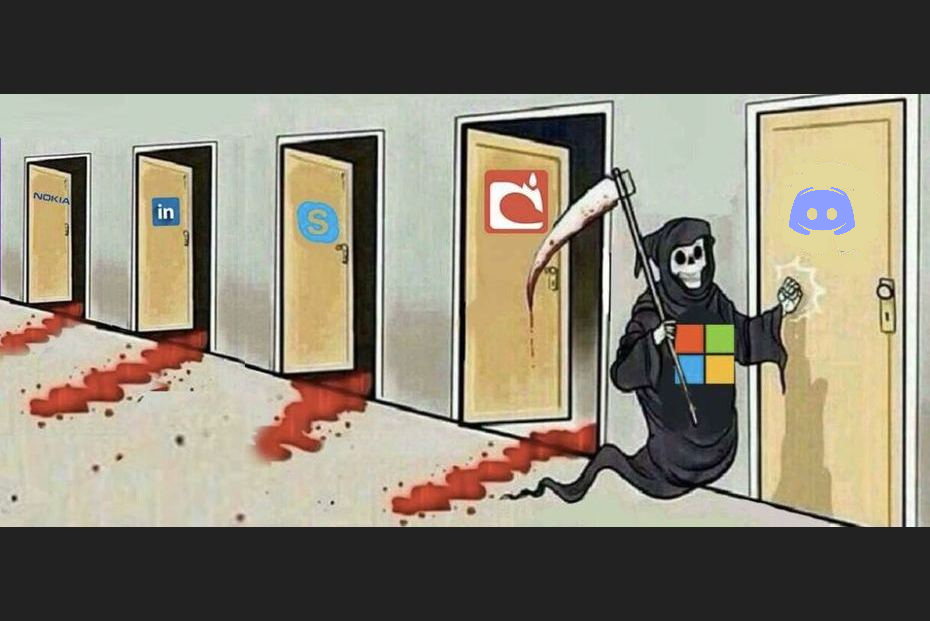 Very unfortunate.
Microsoft obviously has a history of buying good things and destroying them as well as just making bad things in-house.
I've heard that there was a possibility of taking Discord public instead of being bought out. If that's the case, I sure hope they opt for the former.

I'm not going to lie, my reaction to this was, and continues to be, "meh." A lot of the hysteria surrounding this story reminds me of when Microsoft bought GitHub a few years back, and as far as I've heard nothing really bad has come of that. I also don't particularly love Discord over other platforms for any reason, I just use it because so many of the communities I'm interested in use it. If this deal ends up happening and enough people decide they don't want to use Discord anymore, I guess it'd be cool if another platform gains enough popularity to be competitive with Discord.

I thought it was just an April Fools' hoax.

Memes are great!
A pizza with a radius "z" and a height "a" has the volume "pizza" - Legoman314
↑
Quote
Register to Join the Conversation
Have your own thoughts to add to this or any other topic? Want to ask a question, offer a suggestion, share your own programs and projects, upload a file to the file archives, get help with calculator and computer programming, or simply chat with like-minded coders and tech and calculator enthusiasts via the site-wide AJAX SAX widget? Registration for a free Cemetech account only takes a minute.

There are 416 users online: 2 members and 414 guests.
Members: solidbasil, SomeCoolGuy.