Getting my thread in before the contest thread

Sounds fine to me, as long as it fits the theme.

Alright, so some refinement on my ideas; I want to have a game where the player is very hot so that they melt things upon contact or even set them on fire.

I think this is an interesting mechanic, but I'll need to come up with some more ideas. It's been a while since I've seen any things here that were in 3d, so that looks rather appealing to me. Maybe I'll use the calculator as a minimap or something- UI customization through hardware-moving-around. I was given some advice from commandblockguy on how I can interact with the CE through USB:

I made some progress on getting the game set up. I made a small, particularly spikey environment in Blender and wrote some player movement stuff using Godot. You can check out my work so far here but be warned that it might take a hot second to boot up. Not everything is working at the moment because web permissions are much more strict than permissions for things you just download and run from your computer. Since I'm familiar with how the web stuff works this isn't too much of a problem for me, mostly just moving some code around.

The game freezes when you press escape- this elegantly shuts down the game when it's being run as a desktop application, but the shutdown method chosen by the Godot exporter is a little questionable.

Edit: I fixed the issues with the mouse and used a different model for the scenery- I remembered that NASA had some nice freely-available 3d models of mars terrain so I used one of them and adjusted the sky to boot. I also added some fog to make things look nicer.

Looks cool but wouldn't Venus be a better candidate for hot + firey?
"My world is Black & White. But if I blink fast enough, I see it in Grayscale."

Perhaps. The game itself probably won't take place on Mars- it's just lots of fun to play on a map with a huge gash in it because of how I've implemented the movement system. (Also, there are no good free scans of Venus, as far as I can tell)

There will be plenty of other cues for heat later :)

Edit: I'll take this opportunity to share this video I took of some fires. I'm not in love with the new ground color here, it looks too much like chocolate (though that could be an interesting mechanic)

I'm considering adding a purely visual day/night cycle because I really like the way the place looks when it's bright out.

Next up is maybe some preliminary enemy stuff?
↑
Quote

I added lights to the fires so they can light up other things in the scene, like this duck.

Edit: not a big enough update to warrant a post but I spent 15 minutes throwing together some music- it's for the end of the game most likely so I'm not going to spoil it here but it's pretty awesome.
↑
Quote

You could re-color the map and say it's Venus.

My current goal is to work on enemies and enemy navigation.

I've decided that I'm going to keep the gameplay fairly simple and try to make that as fun as possible. I'm going to have like, snowballs bouncing around and then you start fires and melt them.

In the meantime, have another screenshot 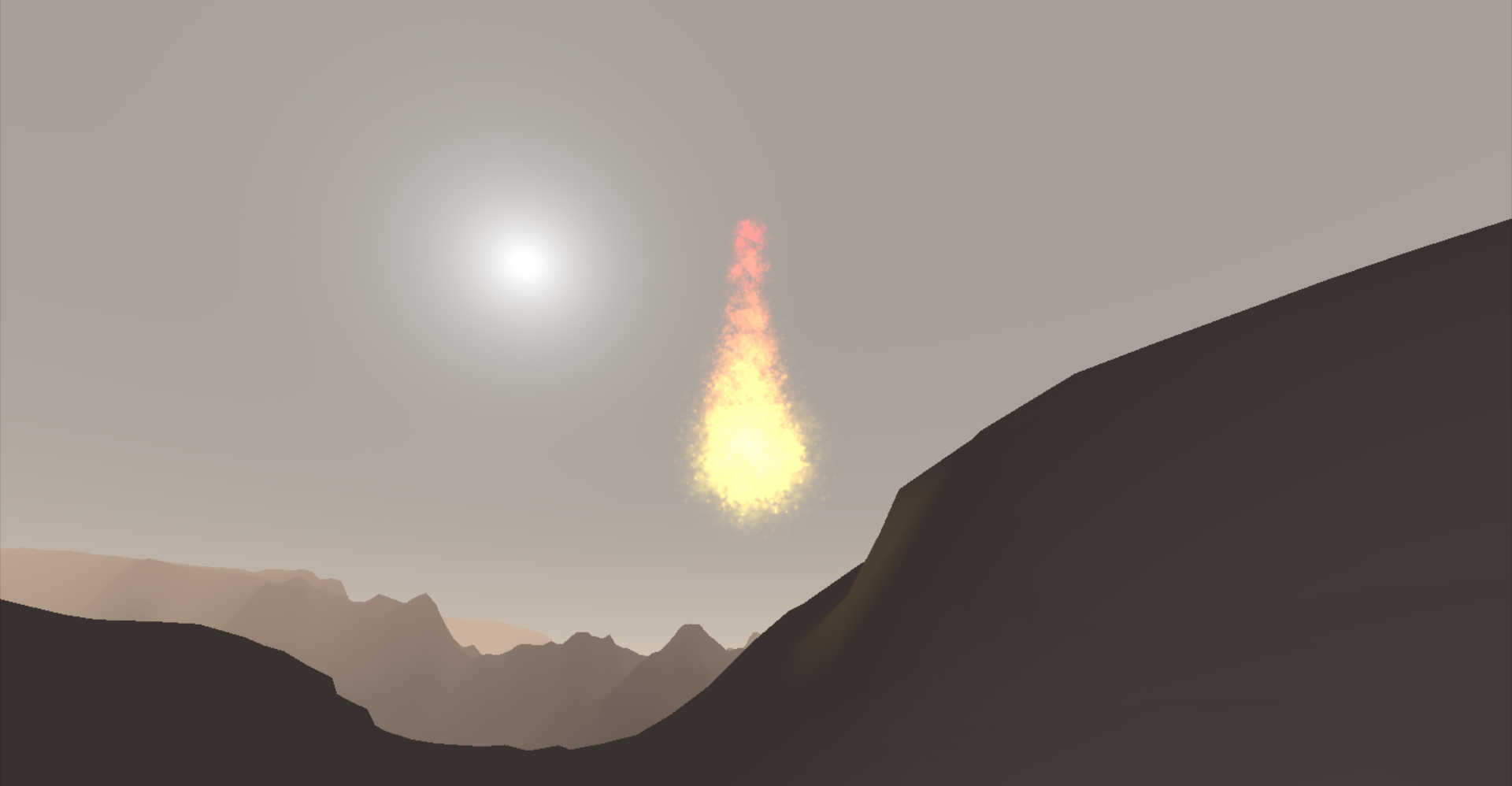 I took some time working on enemy AI: I now have a bunch of snowballs bouncing around, tracking the player. I also worked on a scene for the ending- I have minimal experience using Blender for 3d modeling (in the past, most of my models have been functional in some way, so I used some kind of CAD, like Fusion 360). It's a surprising amount of work to model anything with any appreciable detail, especially without any significant experience in the relevant tools.


I'm really enjoying using Godot- once I got past the initial shock of "wtf I clicked one button and now there are a billion options and I understand only like half of these words and there are only a couple of 3d tutorials and I don't even know which axis is up," I've found it to be a very consistent and straightforward piece of software.

I'm trying not to use any external assets for any part of the final game (most of the external assets in use above are just placeholders until I make my own). This is kind of a sign of pride for me- I'm taking this contest as an opportunity to pick up new skills (and maybe another userbar?

That lighting system is looking good, iPhoenix, as well as the particle effects for the flames. Keep up the effort!