So, yeah, guess I'm doing this now. :p
I'm not sure how to make gameplay engaging for this type of thing. One option would be to lean in to the joke-game-iness of it and make the gameplay intentionally extremely boring (e.g. you wait for the night in real-time to turn on the lamp, then wait for the day to turn it off).
Another possibility, which I'll probably end up going with unless I either come up with a better idea or run out of time, is a grid-based game, where you have chickens, blank space, and walls for tiles. Your job is to place the heat lamps, which radiate heat along the axes and diagonals, in such a way that each chicken is at the correct temperature.

I figure that I'll make all of the marketing for it (e.g. name, archives description, etc.) as much like those clickbaity ads as possible, to the degree that it's immediately obvious that it's a joke, without actually mentioning that it's a game that takes place in a chicken coop until you start up the game.
My projects: Wordle | CEleste | Unit Tool | Tanks! | Terminal CE
If you found this post helpful, consider giving me a karma by typing commandz++ in the SAX chat.
↑
Quote

I simply can not distinguish if this will be a terrible idea or great one (until I see some eye candy). The game idea is surely very simple and would guarantee an early finish.

Alright, I've started working on this. I'm going for the intentionally painful gameplay option, where all you do is turn on and off a lamp once every real-life day. Here's some concept art: American cheese singles in my area and then this? It is the most beautiful thing that I have ever laid my eyes upon. This is the zenith of humanity's scientific strength; only disappointment and loss may come to us in five decades' time. This piece brings tears to my eyes, as it should do to you as well. The raw energy and thought that must have been carefully placed into the positioning and thickness of each black line on this monochrome artwork gives me inspiration. Take, for instance, the single strand of wire that suspends the lighting fixture in place and provides it with ample electricity for day-to-day use. According to all known laws of physics, there is no way a metallic disc with a light bulb could be able to remain in place with such a (likely) flimsy electrical wire. It's much too weak to maintain its rigidity and strength for months on end. The wire, of course, remains in place anyway because MS Paint sketches don't care about what I think 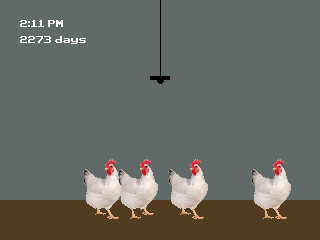 Perhaps you could add other pointless oddities, like a light switch that shows the state of the light, a ticker that says random things like "The chicks are too hot," or a window that shows the time of day.

I do plan on adding a window and a light switch, yeah.
There is a ticker implemented, but right now it's not showing anything as I haven't added any actual temperature stuff yet.

It would be really easy to add support for this, but I don't feel like making a menu just for that, so I'll probably just have it use whatever the OS does.
My projects: Wordle | CEleste | Unit Tool | Tanks! | Terminal CE
If you found this post helpful, consider giving me a karma by typing commandz++ in the SAX chat.
↑
Quote

The basic game logic is now done. Should just be graphics, UI, and one other thing left now.

In the process, I accidentally made this actually somewhat useful IRL. At first, I considered this unacceptable and tried to remove this functionality; however, I've since realized how hilarious it would be for someone to use what's basically an overly elaborate pun for a practical purpose and decided to leave it in.
My projects: Wordle | CEleste | Unit Tool | Tanks! | Terminal CE
If you found this post helpful, consider giving me a karma by typing commandz++ in the SAX chat.
↑
Quote

I've submitted my entry (five minutes before the deadline, woo).

I was able to finish all of the core gameplay stuff, though I had to leave out two side menus due to time constraints - see if you can guess what they were. I also planned on adding an elaborate security system for it to make it difficult to cheat at, but I also had to drop that.

I'm intentionally not really commenting on what exactly I've added - you'll have to try it out for yourself!

Make sure you keep at it - there's a decent amount of content which you can only see by playing for a while.
My projects: Wordle | CEleste | Unit Tool | Tanks! | Terminal CE
If you found this post helpful, consider giving me a karma by typing commandz++ in the SAX chat.
↑
Quote

Make sure y'all go ahead and vote for my entry in the voting thread, and maybe even give the game a try first!

More seriously, the game does have some actual content that you can't see if you play for less than like ten minutes, and to be honest I'd be a bit disappointed if nobody saw it. If you're super lazy, maybe just set the timer forward in the mode menu or something, or read the source code.
My projects: Wordle | CEleste | Unit Tool | Tanks! | Terminal CE
If you found this post helpful, consider giving me a karma by typing commandz++ in the SAX chat.
↑
Quote

In other words: "This game gets most interesting after the first ten minutes. Are you okay with that?"

There are 163 users online: 2 members and 161 guests.
Members: ZebraVogel.