Might as well announce our entry into this contest. Some planning has gone into it but not a lot of code has been written yet.

The plan is to have a fully graphical roguelike game written in C for the TI-84+CE, where you explore the forest and some ruins to find treasures. At the moment, all I've got is some rudimentary dungeon generation, a test run of a tilemap and use of a minimap. Much more is planned.

Simplistic demo. Most of it was coded during last week's HCWP, where I Did C in All The Wrong Ways. Also, too lazy to rerecord without frameskip 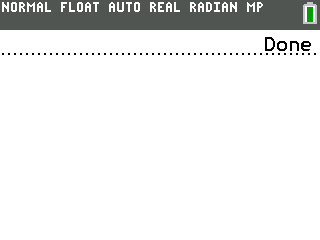 This is a strong pairing by the looks! The screenshot looks great btw (and so does the speed).

I like how you have a schedule etc to work to as per the chat. Very interested in seeing how this entry progresses.
"My world is Black & White. But if I blink fast enough, I see it in Grayscale."

I love the mini-map on the side! Cool project so far, and I can't wait to see how it turns out!
Cemetech Contests are always good ways to get more games

I was kinda hoping Iambian wouldn't enter, but now he's partnered with geekboy, which is even worse!

All jokes aside, your thing looks great so far!

I was kinda hoping Iambian wouldn't enter, but now he's partnered with geekboy, which is even worse!

All jokes aside, your thing looks great so far!


Let's hope for the best

I probably should have been posting stuff long before this point, but I keep getting distracted and suddenly it's two days away from the end with a mountain left to do. Time to break out the mountain-demolishing nukes?

Much of the progress between the previous post and now has been in figuring out the graphical assets that I want to use and basic overall game planning and setup. The development history can be summed up as:

1. Look into maze/dungeon generation algorithms, then settle on something so basic because Geekboy1011 said I really need to get a move on and that there's a whole mountain range to cross.
2. Figure out what graphics I want to use and then try to use it. Figure out how to use convimg to cram everything into appvars. Figure out how to prettify maps with walls and flooring. Figure out how to arrange other graphics (map objects, equipment, consumables, key items, characters) and use them.
3. Figure out how to deal with static (non-mobile) objects. Doors properly generate.
4. Figure out equipment and how their stats will be done.
5. Mobile objects definitions as well. And moving player stats over to that.
6. Inventory and inventory management. Because dragons love their shinies.
7. ... now... ? Anyhoo. here's some pictures. 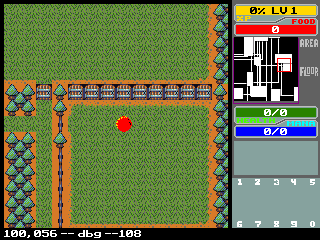 Inventory. In the works 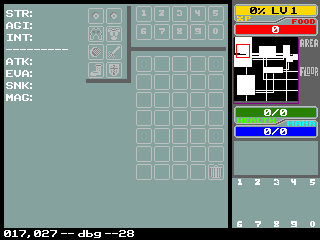 Inventory with test data and a more solid idea of what stats should exist. Also, filling in the sidebar.

Running across the map, because I forgot to include a demo of that between the initial test and now. Also testing enemy sprite animation (top-left). It's a rat. 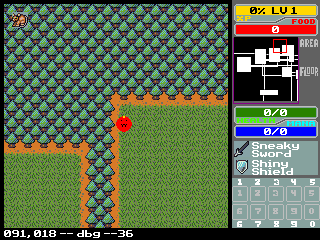 EDIT: Did some quick work while hopped up on whatever the heck is in Rockstar Energy (fruit punch flavor). Got (semi)mobile objects to display and made doors openable. Turned wall collision back on to make sure these are testable. Collision with mobs can be detected but nothing is done with it yet aside from impede movement.

The stuff I described above. Hope hotlinking from Discord works.

The contest appears to have been extended to the 2nd of December. I'm making use of that time to add in a rather poor-ish title screen, the required credits, and maybe more features than a blockish petting zoo.

At the moment, I've got much of that done. The Legendary Cherry of Yendor is nommable. The forest maze can be traversed (spoilers in the source). It's technically a full game if I put in some sort of ending sequence either upon eating the delicious fruit, or escaping the forest. Changes to the collision detection means you won't get stuck on walls anymore. Moving is smooth.

If Discord lets me hotlink this pic...

I swear. If I keep drinking the Rockstar energy drinks, I'm going to let the magic smoke out of something important in my brain.
↑
Quote

Quote:
Ok. I submitted something for the contest. It's not at the standard I'd like it to be but it (is|should be) playable. There's an unaddressed game breaking bug that I couldn't figure out how to trace and fix, so I kinda sorta threw in a couple hundred asm("nop"); lines as a band-aid


So yeah. Random Petting Zoo edition is a go.

This whole thing needs a rewrite to get rid of the mystery bug which looked like code was getting corrupted someplace. Maybe then I'll be able to bring this game up to how I truly envisioned it. I envisioned it as a dragon also nomming innocent woodland critters along the way. And dungeon diving to nom not-so-innocent skeletons
↑
Quote
Register to Join the Conversation
Have your own thoughts to add to this or any other topic? Want to ask a question, offer a suggestion, share your own programs and projects, upload a file to the file archives, get help with calculator and computer programming, or simply chat with like-minded coders and tech and calculator enthusiasts via the site-wide AJAX SAX widget? Registration for a free Cemetech account only takes a minute.