Thanks for all the support, everyone! I'll reply to each of you individually:
CalebHansberry: I'm glad to hear this, and you'll be happy to hear that 2.0.0 will be orders of magnitude more useless and unnecessarily complex than 1.0.0, with a stacking window manager, multitasking (just for things within the shell, for now), and optional cursor-based GUI, like the old DCS7. I will say that I've been getting a lot of inspiration from old Doors screenshots, despite not actually having a calculator to use it on.
Michael2_3B: The wallpapers have been problematic for quite a while now, I imagine the issue that you ran into was with decompression, which I unfortunately can't do a whole lot about. The rest of the stuff shouldn't be an issue anymore, because I'm rewriting the entire shell and can compensate for those problems when I do so.

I also have some good news when it comes to development: I get my real laptop back tomorrow, which has been out of commission for a few weeks or so now with various issues that have now apparently been repaired by HP. So, I can use VS Code and LLVM with CEmu that runs at a reasonable speed again, which should speed up development immensely (thanks once again to Adriweb and the TI-Planet Project Builder team as well, I've been using that in the meantime to synchronize everything). Stay tuned for more updates in the coming weeks/months!

It's been a while since the last post on this, hasn't it...

Anyway, OPTIX 3 is basically done, and I have a screenshot of some progress I made to show, made using the new library in 20 minutes or so: 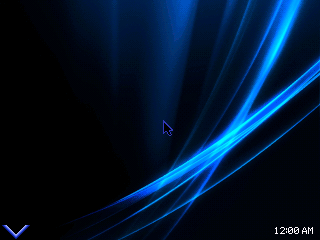 Nothing much yet, but know I'm working on the project, and have been consistently for the last month or so. I can't wait to show you all what the new GUI library is capable of, so please stay tuned for more updates and progress reports in the imminent future.

This is awesome, epsilon5! I can't wait till vysion 2 comes out! (also, that wallpaper is really hi definition compared to vysion 1, can you make the wallpaper 320*240 instead of 160*120 like before in vysion 2?)

KMisthebomb wrote:
This is awesome, epsilon5! I can't wait till vysion 2 comes out! (also, that wallpaper is really hi definition compared to vysion 1, can you make the wallpaper 320*240 instead of 160*120 like before in vysion 2?)

Thanks! And as for the resolution, it is 320 x 240, instead of the previous 160 x 120 (still debating whether to keep that as a supported resolution or not).

Wow, this is looking really good! I had no idea how much full-res backgrounds would change it, but they really make it way better. One suggestion: Will it be possible to change the outline color of the mouse? I can't really see it with the current blue.

TIny_Hacker wrote:
Wow, this is looking really good! I had no idea how much full-res backgrounds would change it, but they really make it way better. One suggestion: Will it be possible to change the outline color of the mouse? I can't really see it with the current blue.

The outline color of the mouse is supposed to be a light gray, but there is currently a palette issue that's making it appear blue (it'll be fixed somewhat soon). It also wouldn't be too difficult to make the mouse colors be customizable, if you think that's a good idea.

I think a customizable outline would be an awesome idea. I think that an important part of a shell is the ability for users to change it and personalize it to their liking.

arusher999 wrote:
XTREME bump*. Anything cool to show us?

uhm in fact, yes (Found it on discord

Wow, beautiful! Do you think I would be able to adjust the size of the text for the time and menu text?
alr bet rn
↑
Quote

arusher999 wrote:
Wow, beautiful! Do you think I would be able to adjust the size of the text for the time and menu text?


I'm not Espilon, But I think this should be implemented in a later version "if it doesn't mess up the mouse system".

Missed this earlier, as Ive been inactive due to being out of town. Alvajoy is right, those are some screenshots of the new wallpaper system and a quick demo of OPTIX 3. The size of the text could also be very easily adjusted-the backend of the GUI system should support both that and custom fonts (which are kind of the same thing).

So I downgraded my calculator to OS 5.3.0, and I downloaded VYSION and sent it to my calculator's archive, and I got a bug where it is stuck on the filesystem loaded first time screen and I can't get out of it without a manual ram reset.
alr bet rn
↑
Quote

Thanks, is there a way to fix it?
alr bet rn
↑
Quote

Try deleting all of the appvars for VYSION-everything that starts with VYS-and try it again.

Huh, there are no appvars showing up
alr bet rn
↑
Quote

arusher999 wrote:
Huh, there are no appvars showing up

Of course there aren't-I should have thought of that. If you'd like, I can send you a working filesystem appvar, and it'll automatically be updated to coincide with what's on your calculator.

I'm trying to post regular progress updates on my Discord server as well, so be sure to join that if you haven't already. Here's a screenshot of most of the progress that has been made over the last few days:

This is looking AWESOME! I definitely think that the higher definition icons and background add a lot more to the overall look of the shell, so you should keep in high-def backgrounds if you can.

Ok, this is SO cool! Keep up the good work