Yesterday, someone on reddit asked if there was a way to display commas as a thousands separator. Adriweb suggested that I work on it after I finished my unit tool, but because of how much simpler it was I decided to do this first. So, I copy-pasted some of the code from my units program and added logic to insert commas into a number:

I also made a version of it that uses spaces instead, as well as one that uses the same notation that those Crazy Europeans use: 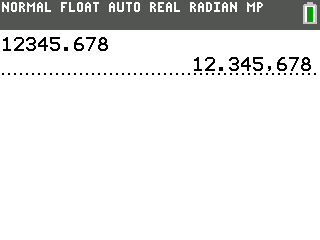 It took a bit longer than I thought it would since I had to fix a bug in capnhook first, but it's finished now, and you can see the source code on GitHub.
My projects: Wordle | CEleste | Unit Tool | Tanks! | Terminal CE
Join MyCalcs today!
↑
Quote

That's something that I never really seen asked for after all these years but is super handy!

You even looked after weird euro format

Nice work as always, really should be a standard on calcs from TI.
"My world is Black & White. But if I blink fast enough, I see it in Grayscale."

Also, as a European I'd use spaces not dots, that's just too confusing.... but yeah I've seen it >.>
TI-Planet.org co-founder / co-admin
↑
Quote

epicmitter wrote:
On my screen it shows missing library USBDRVCE where do I find it


Fixed now - it's not actually required, I think it was a bug with the linker. I've updated the GitHub release already; the Cemetech archives page should be updated soon. Just redownload it and the new version shouldn't complain about that anymore.
My projects: Wordle | CEleste | Unit Tool | Tanks! | Terminal CE
Join MyCalcs today!
↑
Quote

Not important but any possibility of specifying custom separator characters?
"My world is Black & White. But if I blink fast enough, I see it in Grayscale."

Nice work! I have seen this requested quite a few different times, so I suspect there will be a small but vocal subset of users who will be very happy this tool now exists.

This is a really sweet project. I've had people ask me for a program like this multiple times!

After trying to make a video on this project I discovered you have to run prgmCOMMAS three times after a reset to properly re-install the hook. Otherwise large numbers wont display properly, if at all. Perhaps the re-install instructions could be added to the readme? Here I am trying to make a basic program to do this. But lo and behold the ASM gods have delivered.
4 Years in the making!
↑
Quote
Register to Join the Conversation
Have your own thoughts to add to this or any other topic? Want to ask a question, offer a suggestion, share your own programs and projects, upload a file to the file archives, get help with calculator and computer programming, or simply chat with like-minded coders and tech and calculator enthusiasts via the site-wide AJAX SAX widget? Registration for a free Cemetech account only takes a minute.

There are 246 users online: 2 members and 244 guests.
Members: AchakTheFurry, Wit.